A blue print for every sexually offensive romantic comedy, even down to its cast, My Best Friend’s Girl is as generic as they come. It has a number of laughs in the form of one-liners, although few of them have any bearing on a thin plot that serves to be a place holder for Dane Cook adlib.

Like Good Luck Chuck, a ridiculous premise is the catalyst in this farce. Dane Cook plays the unfortunately named Tank, a guy who takes out other guys ex-girlfriends to the worst possible date of their lives to send them back into the arms of Cook’s paying customers. Cook is playing, well, Dane Cook. Kate Hudson is, well Kate Hudson. Oh, and Jason Biggs is… you get the point.

That small little listing of stars becomes the centerpiece for the antics to follow, with Biggs hiring Cook to bring Hudson back to him, but the obviously contrived plot can only go one direction with a title like this. All of them perform standard roles they could probably sleep through, with a small cast of supporters including a funny Lizzy Caplan.

When the film isn’t trying to hit every point in the romantic comedy cliché book, it can be funny. While your style of humor will need to fall into the Dane Cook raunchy, vulgar, and completely inappropriate sense, some of his quips as he tries to turn girls away are priceless. In fact, every scene where he tries to do his “job” makes the film fly by. As soon as he starts falling for Hudson, the entire thing falls apart, and the little annoyances grow into massive irritations.

There’s hardly a shortage of comedies relying on jokes about the anatomy to gain an R-rating, making My Best Friend’s Girl redundant. It doesn’t try in the slightest to actually do something different with the genre, shake it up, or even toss in a twist ending. It’s predictable from the moment the three characters are introduced, and doesn’t stray from that that. It does contain laughs, but they would probably be more appropriate in a stand up show, and not in a feature length movie. 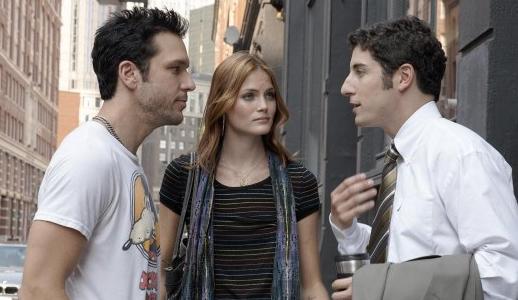 Someone must have messed with the contrast when transferring the film over to Blu-ray, because the amount of black crush here is completely unacceptable. Every scene feels completely under lit, masking all detail with terrible shadow delineation. Flesh tones appear bronzed and sickly. Sharpness wavers constantly, and never settles. Fine detail is noticeable when not obscured by the blacks and at times can give the appearance of a solid transfer, but it’s simply not the case.

Even with a DTS-HD Master 7.1 mix, there’s not much to talk about in terms of audio. This one is entirely front loaded, with only minor surround work in the rears during certain scenes. Music delivers the only notable low end. Dialogue is crisp, although can drop below the usual listening volume. Serviceable and nothing more.

Extras are mostly filler. Two commentaries are excessive, with director Howard Deutch on the first and Jason Bigss joins first-time writer Jordan Cahan, and producer Gregory Lessans for number two. Dane Cook could have at least brought something to these in terms of entertainment value.

Four featurettes total around 30 minutes worth of material, and are all in HD. One seems to sell the public on Dane Cook’s roots in Boston, and comes off as a shamelessly promotional. The Prom and Cast’s Guide to Dating are mearly excuses for the cast to deliver personal experiences from their lives, while A to Z discusses the way guys grade women. None of the latter have anything to do with the film itself. Fourteen deleted scenes feature a lot of content that ended up in the movie, while trailers and the useless MOLOG BD-Live feature sit here too.