There are kid’s movies that are designed to lightly entertain, and others that break a mold and enter into uncharted territory. While full credit can’t be given to the film as this is based on a long-standing classic children’s novel, the on-screen emotional impact of Bridge to Terabithia is undeniable. While not a great film, it’s a surprising, involving ride that you’ll remember long after the credits.

AnnaSophia Robb stars alongside Josh Hutcherson, two young actors with plenty of talent to pull this story off. Both are kids with problems, Hutcherson stuck in a tough home life and Robb standing out as too different to fit in. Together, they imagine a kingdom called Terabithia in a forested area near their home.

The kingdom becomes an escape from the real world, one that is dealt with in surprising detail for a movie aimed at the younger set. It’s refreshing to see Terabithia not shying away from tough issues such as abuse, but instead embracing them as the reality they are. In fact, the kingdom is a rare escape, using sparingly in the film.

While those not familiar with the book may see this is as a film patterned off of say Spiderwick Chronicles, rest assured it’s not. In fact, Terabithia has a twist that one ups Bambi’s mom being killed in everyway possible. It’s hard to tell how a child younger than 10 will react when the bomb is dropped. Needless to say, it’s not an easy thing to deal with, and thankfully the film sticks with it.

Terabithia does take some time to pick up momentum, but it’s building a relationship that has significant meaning later. A second viewing is nearly required if you didn’t know what to expect coming in to see how fully fleshed out these characters are. Don’t expect a typical kids fantasy film, but enjoy this one for what it is. 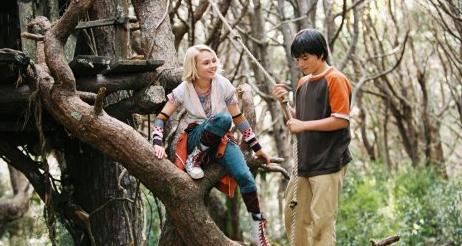 Terabithia is almost perfection in terms of its video. However, due to some artificial processing, it falls flat. There’s some slight edge enhancement sporadically throughout the film. Grain comes and goes, possibly due to DNR, although it’s handled well if that’s the case. Colors are vivid, and the contrast is excellent.

Certain close-ups look outstanding, loading the frame with fine detail and a sharpness usually reserved for the best transfers available. Long shots, especially the full reveal shot of Terabithia, simply don’t hold up. Detail is lost to artifacting, and the entire thing lacks clarity. It’s close, but there’s too much going on that shouldn’t be here.

The audio makes up for the video faults multiple times over. This one truly succeeds is creating atmosphere. From the playground to the classroom to the wind sweeping through the trees, all channels are effectively used to create a compelling and immersive sound field. There are some solid uses of the LFE channel, especially when the troll begins its chase. This is a spectacular PCM mix.

Two featurettes are included. The better of the two is Behind the Book running just over 14 minutes. Included are interviews with educators and the book’s author as she discusses the finished film. The second, Digital Imagination, is standard fare for special effects features, and runs a brief six minutes. Finally, a music video from AnnaSophia Robb rounds off the extras.