Ridley Scott’s late ‘80s international police thriller Black Rain has a lot going for it. It’s grim tone, culture clash, performances, and wonderful direction from Scott are all positives. The story is the downer, dragging at times and not to mention predictable. It’s still worth a watch purely for Michael Douglas and the unique position he’s in.

A murder on US soil sends a killer back to Japan, with Michael Douglas and Andy Garcia as his escorts. When the murderer, played by Yusaku Matsuda, escapes, it becomes an investigation stalled by Japanese politics and traditions. Douglas begins lashing out with a comedic tone that almost seems out of place, but makes the process enormously entertaining. Garcia steals the show however, particularly a priceless karaoke sequence that isn’t soon forgotten.

Pacing here is sluggish, and the constant clashes between the cultures do grow tiresome, even if they’re building towards something. Kate Capshaw is limited in her role and barely has time to develop much of a character. There are some lines of dialogue that are certainly dated, and come off as unintentionally funny.

That said, Scott’s direction comes through beautifully. The look of the film, dark, wet, and loaded with neon, isn’t that far off from Blade Runner. It separates Black Rain from other cop dramas of the era, keeping it from feeling unnecessary thanks to its unique style. If anything, this is one to look at.

At times it’s predictable, but Black Rain has just enough going for it to keep it a level that’s worth recommending. It’s a product of the ‘80s, no question, but Scott keeps this one relevant even today with his unique look that overcomes the dated dialogue. Douglas is a blast to watch, and the action does offer some minor intensity. 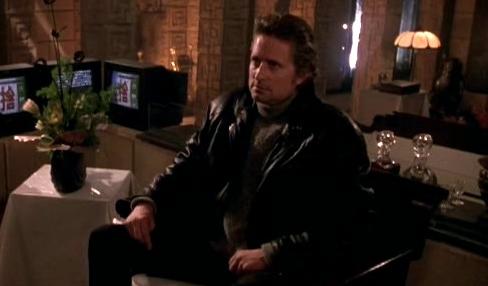 Sadly, the film’s visual sense is all but destroyed by this MPEG-2 transfer. Flesh tones are always wrong, and colors bleed. Black levels are strong, but shadow detail is poor giving the film a murky look. Sharpness is never fully resolved, and some light edge enhancement is visible occasionally. Artifacting noise is noted a few times, although not a consistent problem. Scenes that do offer some detail (extreme close-ups) are still marred by a digitally processed look the film struggles to overcome.

Compressed audio is ignored, with Paramount offering DTS 6.1 and Dolby 5.1 EX mixes. Neither is stellar, although the DTS mix offers a higher bitrate with cleaner dialogue. The Hans Zimmer score does fill the soundfield, although the same can’t be said for the front-loaded action. Some mild stereo channel usage is noted, yet unspectacular. Bass is natural, though only delivered by the music, not the action. Gunfire sounds strained and flat.

Ridley Scott delivers a solo commentary that seems like a moot point after an extensive hour-plus documentary, split into four parts. There’s a surprising amount of material in this piece, which covers everything, including the troubles involved when shooting in Japan. Trailers are final extras, but the documentary is well worth your time.