Here’s what The Condemned wants you to believe: A rogue producer could set up an internet show in which death row inmates are dropped onto an island. They must kill each other, and the last one alive gets to go free. Think Survivor only with less logic and entertainment value.

The set up is so asinine, it’s impossible to believe the same guy who wrote Friday the 13th VIII: Jason Takes Manhattan is responsible for it… on second thought, it’s actually quite believable. This rogue producer, played with zero style by Robert Mammone, wants the highest number of viewers possible, and promotes the show everywhere across this great Internet.

This makes his promise of freedom the single most absurd concept in recent memory. When the counter hits 40 million buyers, how could the free man possibly escape? Who’s not going to know his face given it was plastered all over the online blogosphere it was marketed to? Are people going to be sitting in their homes, see this guy walk down the street and say, “Hey honey, isn’t that the homicidal maniac who killed nine people on that show we watched? Let’s go get his autograph!” Probably not.

Plus, Mammone is a producer. Not only is this show illogical and illegal, what’s going to give him the legal right? Even as death row inmates, these criminals have to at least be smarter than the movie.

Even that’s not as brain dead stupid as the moral issues the movie tries to raise. Picture this: You take a job at a company, fully aware you’ll be producing the above show where murderers kill each other for all to see. Once it starts, you have an epiphany that this isn’t right and you want out. Huh? Did you not read the premise, hear the promos, or talk to a co-worker before signing up?

And yes, this does get dumber, as one of the characters decides he want to go along with the show, but then is agitated that it is being rigged. Never mind the image of a man being savagely beaten to death on the screen behind you. No, throw a fit that the producer has rigged the show.

Also, if you’re trying to build some moral compass around this disaster, showing multiple woman being brutally assaulted, shot, raped, and blown up probably isn’t going about it in the right way. In fact, you’re headed in a direction that can barely be described in words.

A few subplots go absolutely nowhere, including an investigation by the government into the program. It’s there to build up pro wrestler Steve Austin’s character, the usual rundown of the action hero cliche including all sorts of special forces and black ops credentials. This adds yet another layer of idiocy to this script, expecting the audience to believe no one will figure out where this place is. Apparently the on-air interview with a TV reporter before it happens wasn’t enough to clue anyone in. And how did the reporter know but the highest levels of government are clueless?

Action sequences want to be brutal and gruesome, yet tend to end up in explosions that don’t show much of anything. The script goes for the gusto when it comes to pyrotechnics, and the conveniently placed cameras filming this stuff for the Internet audience all happen to be in the right spot for the dramatic angle, yet save the lenses.

If you want to see a movie take this concept and do it properly, see Death Race. Set in the future, society is already at the point where death online is acceptable, and criminals are used to slaughter each other in vehicles. There’s no attempt to legitimize the concept, just blow stuff up. Maybe The Condemned should have taken the dumb angle as opposed to brain dead. 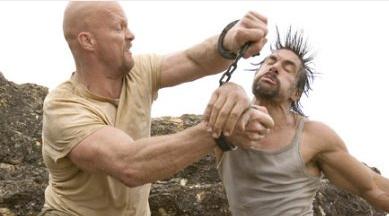 For the absolute mess the movie is, the transfer does have a few positive qualities. Detail and sharpness are at times flawless. Facial textures are stunning with immense depth. Black levels can be rich, deep, and thick. Contrast runs slightly hot, but is mostly under control.

The problem is that none of the above is consistent. Detail and sharpness drop dramatically inside the production tent and the FBI offices. Black levels waver and dip. Flesh tones head into pink territory. Two brief rounds of noise are forgivable (especially the background at the 33 minute mark). While it carries the characteristics of perfection, it’s all over the place.

Lionsgate delivers a 7.1 mix, but it’s DTS-HD High Resolution (at 2 MBPS) unlike their usual Master Audio tracks. Still, it delivers in many ways. The low end throbs when the soundtrack kicks up, and punches have some force behind them. Explosions are powerful and clear. Helicopters nicely circle the action, hitting each speaker as they go. Ambiance, especially given the jungle setting, is disappointing though.

Two commentaries fail to help viewers understand why this movie was ever greenlit, the first with director Scott Wiper, the second with Wiper and Steve Austin. A making-of is split into five parts, and can thankfully be viewed whole at 38 minutes total. Sadly, it’s mostly promotional fluff. Capital Carnage Reunion briefly recounts Austin’s first meeting with co-star Vinnie Jones at a WWE event in the UK.

Stone Cold at Movie World is a promo that ran during WWE Monday Night Raw for promotion of the film detailing an autograph signing. A stack of deleted/extended scenes are close to 50 minutes in length, and offer an optional commentary. Trailers and storyboards follow those up.