Going into any Adam Sandler comedy, you need to be prepared for the lowbrow schlock to come. Click is no exception, but unlike the usual light-hearted farces starring the comedian, Click takes a dark turn in delivering an unexpected message. While uneven throughout, the film becomes enjoyable overall, even with a cop-out ending.

Dogs humping stuffed animals, ball kicking, farting, and fat jokes firmly put Click into Sandler’s resume. There’s nothing wrong with it. It’s funny to his audience, it’s funny in the movie, and it breaks up some of the spaced out laughs the movie suffers from.

The film takes a while to find its groove. The typical, dull set-up has been done to death with the overworked father ignoring his family for a hefty paycheck. The non-marital bliss is typical, and only serves as a small backdrop for the drama yet to come. Laughs are few until Sandler’s character gets his hands on the remote control that lets him control his life.

In hand, Sandler has a blast passing over life’s tougher moments, and enjoying those he wants to remember. The light comedy is harmless, giving off an “I’ve always wanted to do that” feel. Click has trouble following its own rules at times after setting up how the remote works, though these quirks are easily overlooked.

What happens is a hard, dramatic turnaround from comedy to drama. While the approximately 20-minute span of hard times sports a few laughs, Sandler realizes his mistake in not giving the movie a message. While the shift is completely out of left field, it’s unexpected in a good way. It raises the film past the rut the movie could have fallen into and makes it something more.

The ending does some heavy damage though, falling back on one of the oldest writer’s outs of all time. The Hollywood finale is a farce, making the otherwise dramatic twist pointless. It’s a shame. Still, Click has enough comedic merit to carry it through, and you’re left with the feeling of being entertained (if not completely). 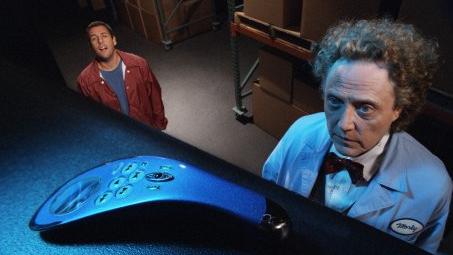 This one comes to Blu-ray with a decent, if flawed transfer. Black levels appear too dark from time to time, blotting out details and giving daylight scenes a dim quality. Colors are incredibly vibrant. They remain consistent throughout, while the video noise does not. Detail is relatively sparse and flat. Sharpness is on par though hardly special. Flesh tones can waver into bright orange from time to time.

Uncompressed PCM is the audio format of choice, and this is a surprising mix. Though mostly dialogue driven, there are plenty of chances for the bass to get a workout. Thunderstorms deliver, and a fireworks show is especially impressive. Some surround work is definitely noticeable when Sandler visits life’s “menu.” Crowded areas handle some minor atmosphere. For a non-explosion filled comedy, Click sounds far better than expected.

A four-person commentary starts things off in the extras department. Sandler joins director Frank Coraci, a producer, and writer Steve Koren. Four deleted scenes (one of which is an extended piece) run for about three minutes. Seven featurettes are well above standard promotional material, particularly one on the make-up. Another on the dog’s, uh, obsession is unexpected, too. In total, they run about a half hour.