A classic case of misrepresentation, We Own the Night is advertised as an all out brother vs. brother crime war. It’s the furthest thing from it. What you do get is a deeply woven family crime drama, with Joaquin Phoenix taking the show as his own.

Mark Wahlberg stars as Joseph Grusinsky, a NYPD detective assigned to the drug unit. His brother, who changed his name to Bobby Green (Phoenix), is on a slow downward spiral into the cities growing drug trade. What follows is the unexpected as tragedy strikes the brothers forcing them to bond and mend their broken relationship in order to take out a ring of international crack dealers.

We Own the Night rarely ignites the screen with action. Aside from a stunning car chase in a downpour and some minor scuffles scattered throughout, this is a dialogue driven character drama. Characters reveal deep pasts intricately woven into the narrative with few wasted lines.

Wahlberg fans will be taken aback by the relatively small amount of screen time he is given here. However, a lot happens when he is on screen, and his interactions with his on-screen brother show superb chemistry between them. To the uninitiated, they could pass for real life brothers even though they look nothing alike.

The supposed conflict between them (as advertised) is non-existent. With the exception of an emotional breakdown, there is only mild tension present for the first half. The rest of the film forces them together, and by the time the finale begins rolling, their relationship is complete and believable.

What is stopping Night from being branded a complete success is some out of place humor, both intentional and unintentional. Eva Mendes is given some especially painful lines, and doesn’t deliver them with the tone needed to avoid laughter from the audience. Certain directorial choices from somewhat unknown director James Gray, including a specific shot in the final moments, are completely over-dramaticized.

It’s the performances, with Phoenix unquestionably on top, that makes the script come to life despite those missteps. The story arc is paced wonderfully. Supporting performances from the always strong Robert Duvall and voice actor Alex Veadov round off a solid cast.

This is one to skip for someone looking for heavy action. We Own the Night benefits from its time spent developing characters and resolving open storylines. The plot is complex without being confusing, and the performances sell everything. 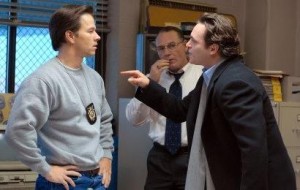 This is a thoroughly disappointing Blu-ray effort. Soft, murky, and lacking detail, the transfer is a mess. The black levels waver from time to time, and flesh tones are all over the place. Smoke used during the finale simply destroys this transfer in the closing moments, affecting color, grain, and compression. A few minor scenes of note do rise above mediocrity, but these comprise only a tiny piece of the overall film.

Audio is also flat. The fantastic car chase that highlights the movie’s action is devoid of any special surround activity even though it takes place in a massive rain storm. Scenes in the club do a decent job of creating atmosphere, and the finale is notable for fun sounds of tall grass being pushed around. Earlier scenes have non-existent bass when guns are shot, and the surrounds remain silent as well.

Extras, like everything else on this disc besides the movie, are lackluster. A commentary with James Gray is insightful if not generic. All the extras are in HD, and ironically, provide far better video quality than the main feature. Tension – Creating We Own the Night is standard DVD making-of material for 15 minutes. Police Action focuses on how the major action scenes were done for 10 minutes. A Moment in Crime is the last piece before some trailers finish off the disc, and spends nine minutes discussing how the film was set in the ‘80s.