Written by first-time screenwriter Grant Nieporte and directed by Pursuit of Happyness director Gabriele Muccino, Seven Pounds is an involving piece of drama that doesn’t hold up logically. Will Smith is superb as Ben Thomas, giving a performance worthy of his previous work, but his talent isn’t enough to carry the film.

It’s exceedingly difficult to discuss Seven Pounds at any length without ruining the story. The audience is supposed to be lost and confused from the start, and even well into the film. It’s a build-up to a dramatic twist at the end that’s foreshadowed, but never is the ending completely out in the open.

Smith plays an IRS agent who becomes involved in strangers lives extensively to help them, yet his motivations remain a mystery. He begins a romance with a woman (Rosario Dawson) desperate for a heart transplant. Their relationship becomes the centerpiece for the film on which Smith begins to base his actions.

When the ending does happen, one has to question why anyone would choose the method Smith does. It feels overly dramatic and long-winded, and almost seems included to make it impossible to predict.

Seven Pounds is a fine drama, with good heart and well developed emotion. However, the script throws the story at the audience, making it difficult to become attached until the mid-way point. Seven Pounds is worth watching, although it’s flawed and somewhat unexplained in a variety of ways that sadly can’t be brought up in a spoiler-free review. 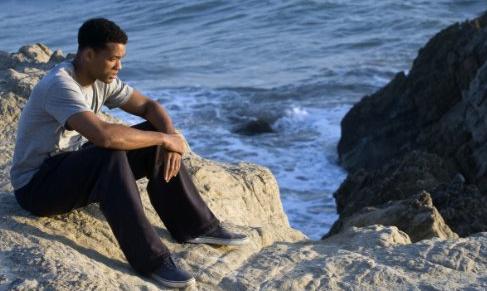 Seven Pounds delivers an outstanding hi-def presentation. This is a razor-sharp AVC encode, one that grabs the audience from the opening frames. Here, Smith sits in close-up with phenomenal detail, complete with every visible pore and wrinkle on his hands. The rest of the transfer lives up this immediately high standard.

Colors are rich and bold without bleeding. Contrast is flawlessly calibrated, and the deep blacks deliver in every frame. Shadow delineation is excellent. A minor bout or two with video noise (when Smith is talking to Barry Pepper in the hotel against the blue wall) is visible, but minor. Edge enhancement is non-existent, and the grain structure is left intact.

Despite a few opportunities, this TrueHD mix is front-loaded throughout. Ambiance is dead, stuck entirely to the front sound field. A car crash late in the film fails at moving from those same confines. Dialogue is always at an adequate volume. Despite a few chances, Seven Pounds doesn’t deliver.

Extras kick-off with a commentary from Gabriele Muccino, followed by a collection of seven interviews with various cast and crew members on the film. Creating a Perfect Ensemble runs for a little over 12 minutes, focusing on the actors aside from Smith.

The Box Jellyfish is a short five-minute lesson on the creature featured in the film, while Emily Passion details the antique printing equipment used as a plot device. Four deleted scenes, trailers, and generic BD-Live support mark the end of the extras menu.