King of California is a movie you walk away and are unsure what to think. It’s the story of Charlie (Michael Douglas) and Miranda (Evan Rachel Wood), a father/daughter pairing. Charlie is fresh out of a mental institution for treatment of bi-polar disorder, and stays with his daughter.

The quirkiness begins as Miranda learns of her dads intentions, that of finding a lost Spanish treasure buried beneath a Costco. He is obviously crazy, but Miranda goes along with it, and that is where the film begins to lose itself.

Miranda’s character is obviously spiteful of what she has gone through, including dealing with a divorce and crazy father. She works at McDonald’s to pay bills and support him, but lashes out multiple times during the film for the problems in her life directly related to Charlie.

Still she is always by his side, even when risking jail time for breaking into Costco late at night to drill underneath it. The father/daughter connection simply isn’t there, and the attempt at a poignant ending fails due to that very reason. The audience doesn’t feel anything because the characters don’t.

Director Mike Cahill uses a lot of sporadic, wasteful shots of the two wandering around various locales trying to pin down the treasure location. Not only are these shots confusing, with little or no information as to their location, they drag the pacing and flow of the story which in the end is purely about two people.

There is very little to King of California given its simplicity and small cast. This is a well acted, well shot film, but one that never engages or draws you into its world. King of California is trying to be quirky for the sake of it. 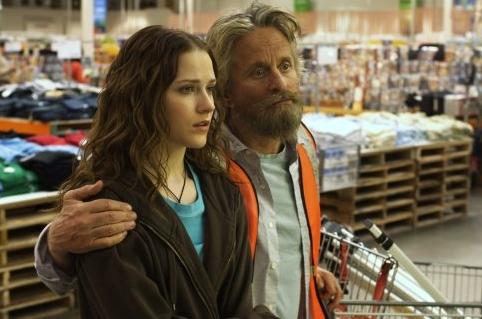 First Look Studios delivers an excessively bright VC-1 encode, with color saturation high and contrast blooming. Neither is a terrible detriment, but does affect fine detail, particularly on faces. Sharpness is fine if unspectacular.

Black levels are wonderfully deep with only minute black crush. Shadow delineation is otherwise strong. The early parts of the film struggle with excessive aliasing and flickering, a problem that seems to disappear into the second act. Banding is a problem during an underwater scene late into the film. This is a close call, but the number of problems are noted and taken into account.

King of California comes with a rare Blu-ray Dolby Digital Plus track that comes in at 640 Kpbs, and a compressed DTS mix at 768 Kbps. The latter is what the review is based on.

Dialogue driven, there is little audio punch behind the film. As Michael Douglas uses a backhoe, the engine provides a nice jolt of bass, as does a jackhammer later. The soundtrack sits in the front channels with minimal bleed. Dialogue remains in the center throughout.