Vacancy isn’t trying to reinvent the thriller/horror genre. It opens with a list of movie clichés, from the car breaking down “in the middle of nowhere,” to the only visible building being a creepy, rundown motel. Even when it begins a frantic pace, the scenes are familiar and predictable. What Vacancy is trying to do is provide tense, tightly wound entertainment for about 80 minutes. It works.

Luke Wilson and Kate Beckinsale are the troubled, soon-to-be-divorced couple who are in the unfortunate situation of being watched. Video cameras are installed all around their room in the disgusting, unkempt Paradise Motel and their car is broken down a few miles away. The people watching on the cameras? They’re the ones looking to murder someone.

In a refreshing change of pace, the scares don’t come from excessive gore or shocking violence. They’re done by clever direction, sharp writing, and built-up tension. The film goes at a slow, plodding pace before arriving at the inevitable chase sequences. It takes over a half hour for Vacancy to settle in to its eventual mix of scares, flickering lights, and running.

That can benefit the film, ensuring all character details are taken care of early. It also gives plausibility to their actions, and allows for an open slate to insert as much danger as possible into the script. No time is spent giving backstory on the killers, which turns them into mindless thugs, though the thick tension doesn’t give you time to think about it.

It’s not an award-winner or original piece of filmmaking, but what it sets out to do, Vacancy does nearly flawlessly. It’s tight, sharp, and loaded with well-done scares (though the ending goes too Hollywood). Performances are great and the dark, gritty look couldn’t have been done better. For thriller fans, this is a solid piece. 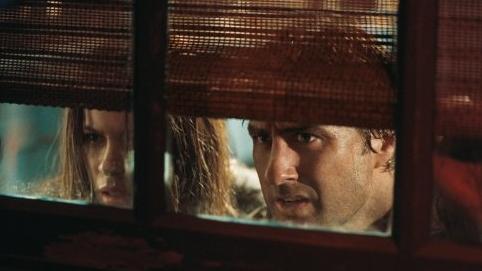 Shot almost completely in darkness, there’s little room for this disc to show what it can do. Details are muted by the black levels, though you can notice facial detail and the overall sharpness. Some strong color shows through when it has a chance. The transfer is fine, but the movie doesn’t allow for a hi-def breakthrough.

Likewise, this is a front-loaded mix with only a few moments of notable audio work simply because of the film itself. A car chase leads to some fine surround work that puts the viewer in the moment. Some knocking also makes its way into the additional speakers, though it’s not effective in increasing the tension.

Checking In leads the extras with a standard making of piece. It’s highlighted by some nice behind-the-scenes footage during its 21-minute run time. Multiple extended snuff films are definitely on the disturbing side, and didn’t really need to be included here. An alternate opening and a funny deleted scene are the last of the special features.