Kate Beckinsale stars in this energetic, myth-based horror movie, setting the comic world on fire by donning black leather in her fight against a werewolf horde. While weak in story, the stylish gunfights create memorable visuals, and the superb werewolf suits are worth watching for fans of practical effects.

Part of the problem with both of the Underworld movies is their plotting. The light plot only serves to give a purpose to the action and fails to dig deep into the mythology the films are presenting. Forget what you used to know about vampires. Might as well forget everything you ever knew about werewolves, too.

Though some of the classic mythology remains, now vampires are sophisticated creatures living a lavish life. The werewolves are thugs, simply trying to survive and one day become the dominant species of the two. This good-versus-evil battle can only carry the viewer along for a time.

That said, it’s a nice take on the mythological creatures and gives the movie its own sense of style. Of course, with some of the insane camera movements, dark colors, and over-the-top action, it has plenty of style before you even know the concept.

The movie runs over two hours long, made even longer thanks to this unrated edition. It drags in quite a few places and with an extra 13 minutes of footage, it’s even worse. The time could have been better spent digging into the history of this war, or how the creatures came to be. The special effects are spotty as well, occasionally using some painfully obvious CG. Still, there is some great action here, all filmed in a superb style. 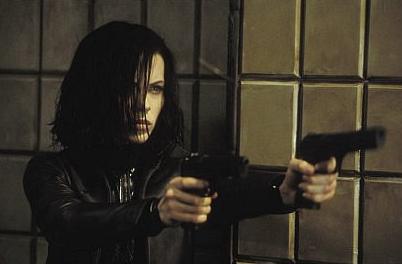 With its flashy action and kinetic style, this would be an immediate pick for any HD presentation. That said, this is an oppressively dark movie, drenched in shades of blue. The contrast is striking, though some will be left unimpressed by the lack of blistering color associated with hi-def.

The disc maintains the intended presentation with stunning sharpness and clarity. Details that can be seen behind the rich black levels are spectacular. Shadow delineation is rather poor at times. Close-ups of the monster suits are flawless in picking up everything the special-effects department put into them.

Likewise, the uncompressed PCM mix is killer. Tiny, typically lost pieces to the audio are noticeable, including bullets leaving the gun on the left, and hitting their target on the right. You can hear the trail. Other impressive showings include a late sequence involving a whip in which the ropes hit every speaker as they twirl around, and the deep bass when the werewolves take their steps.

Originally, the unrated DVD release came on two discs, though Blu-ray crams everything onto one. A commentary track with Beckinsale, director Len Wiseman, and Scott Speedman start off the extras. This does not include the dual commentary tracks from the first non-unrated DVD effort (confused yet?). Next up is an AMC documentary entitled Fang vs. Fiction, which looks at the history of werewolves and vampires. It has interviews with many people, including one guy who believes he is a werewolf. It runs 47 minutes. Also tossed on are some brief outtakes, TV spots, and trailers for other movies.

Starting off the next set is a generic making of that gives little real insight into the film during the 13-minute running time. Visual Effects of Underworld looks at, duh, the special effects. It’s nothing more than a simple overview of how some of the CG was composed for ten minutes. Creature Effects looks at how some of the “on set” effects were done including the design of the monster suits. This is probably the best 13 minutes you’ll find on the disc.

The next featurette, Stunts of Underworld, looks at how some of the more unbelievable tasks were accomplished and lasts for about 12 minutes. Designing Underworld handles the storyboards and finished sets. You’ll spend 11 minutes on this one. The Look of Underworld feature describes how they make the film look so dark, the importance of color, and the rain. This is a long one coming in at nearly 20 minutes. Finally, you have a feature called Sights and Sounds which is simply nine minutes of behind-the-scenes footage. A music video is the last piece to this disc.