The Reaping manages to hold its audience for a while. Hilary Swank deals with a number of (incorrect) biblical prophecies concerning the plague, all while writing them off as her hardened atheist views push her towards the scientific explanation. The bloody river, dead cattle, recurring visions, and running blood make for some eerie, tension-filled sequences.

The slow build-up to the conclusion is littered with multiple story paths that in the end don’t feel necessary to the overall plot. They develop characters, though it’s not necessarily needed for a movie coming in at around 90 minutes.

Aside from one of the opening shots of Chile (which is obviously computer generated), the special effects come off nicely. A plague of locusts is a nice mixture of real bugs and CG, and the finale delivers intense visuals. Director Stephen Hopkins can build tension prior to the effect taking over effectively.

Everything in The Reaping comes down to the convoluted, ridiculous ending. You forget the prior events, staring dumbfounded by the multiple twists that come one after the other. Trying to make sense of it only ends in confusion or the reveal of plot holes. It looks spectacular, but is so offbeat compared to what came before it, it feels tacked on from another movie.

Regardless of where you stand on the Bible, The Reaping is hardly the movie that will suit you. It doesn’t get the order of the 10 plagues right, and doesn’t even follow them correctly. The ridiculous religious and scientific babble can’t hold the ending together, or your attention. 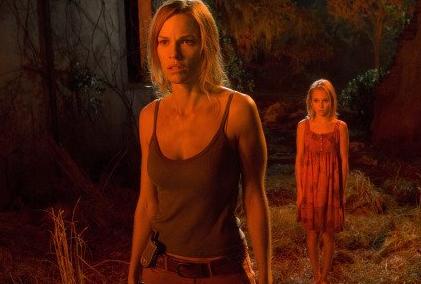 Nicely detailed with sharp color, this could have been a stand-out transfer on the format. It’s a shame then since the weak, gray-scale black levels fail to generate any strong contrast. The transfer is given a washed-out look whether in daylight or dimly lit scenes. The clean print offers wonderful clarity, but there’s no depth coming from this disc.

The audio is thankfully an improvement. Warner supplies a nice, well-rounded TrueHD mix to offer some excellent immersion during the action sequences. A locust swarm delivers in the surround channels, and the finale creates some brutal bass with hefty explosions. Some minor yet noticeable work comes from water splashing or branches breaking as they traverse the swampy environment.

Science of the Plagues begins the special features with a 16-minute look at the plague mentioned in the Bible and whether or not it happened (or if it did, the science behind it). The Characters is a short featurette in which the actors make some sense of the roles they play. A Place Called Haven details set design for the small town.

The Seventh Plague is a whopping 39 seconds (yes, seconds) that ever so briefly delves into actor Idris Elba’s encounter with locusts. AnnaSophia Robb’s Scary Story has the young actress narrate a story she wrote during the shoot while cheap video rolls in the background. It’s a little over three minutes long.