Remakes are exceptionally tricky when the source material is highly regarded. For Planet of the Apes the deep social and general societal issues along with the intriguing look at science made the film the classic it is. Tim Burton’s massively budgeted update only contains brief moments of this brilliance, crafting a decent chase film out of the concept with a tacked-on ending that baffles the mind.

Mark Wahlberg takes on the Charlton Heston role, crash landing after passing through a time warp onto a world populated by human-hating apes. Filled with action, Wahlberg spends most of his time running from the brilliantly designed apes (another set of Rick Baker specials) instead of entering into the intellectual and intriguing conversations that filled the original.

In this update, humans all have the ability to speak, which makes it odd that there is (or was) so little discussion before the apes so thoroughly took the planet. The strong human presence isn’t fully explained, and neither is the new back story to be believed. Significant plot holes crack Burton’s Apes wide open.

The apes are the developed characters here, and strong performances from Tim Roth, Michael Clark Duncan, and Helena Bonham Carter behind mounds of prosthetic make-up save the film from any campiness. Wahlberg’s character takes a back seat, overshadowed by his co-stars. His character doesn’t have much to connect with behind the typical military tough guy attitude. Ari, Carter’s ape character, offers the emotional connection and the only really thought-provoking dialogue.

Action scenes are filled with impressive stunt work, and rank high on the intensity scale. Humans always feel overwhelmed by the overpowering apes; Burton’s direction deviates from his usual oddball style, and makes this his most “Hollywood” production to date.

The injection of heavy humor into the Apes saga also feels misguided. This is what replaces the important science and other engrossing conversation that made ‘68’s Apes the classic it is. It’s certainly funny, and Paul Giamatti gives a fantastic performance as a human slave trader. In terms of the darkness of the material, it never fits into this story.

Then there is the ending, an unexplained, baffling, confusing, and illogical finish. This is by far the biggest misfire of the remake (or retelling if your prefer), replacing one of the grandest finishes in cinema history. It destroys the story and the purpose, and caps off one of Burton’s weakest efforts to date. 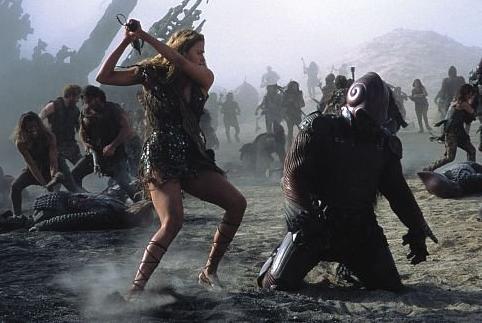 An MPEG-2 transfer, the Blu-ray disc hits a few rough patches, but still manages to be worth an upgrade. Problems lie with the muted, muddy black levels, which push depth away instead of creating it. The few scenes shot in the light look sharp, and the print is clean. Landscape detail is stunning, as is the make-up of the apes. Colors are bold when needed.

On the opposite end, viewers are given a wonderful DTS-HD lossless mix. This is a powerful, bass-filled audio track. Surrounds are stunning in their ability to follow the action, and the crash sequence near the beginning is a classic example of how audio can enhance the experience. Movement of the apes is captured in every channel, tracking the creatures as they march towards and behind the camera. It’s a stunning effect.

A two-disc set (with a third in some stores) was given to fans on DVD. How many of those extravagant features made it to Blu-ray? One. Tim Burton’s commentary is fine until he fumbles when trying to explain the ending. A couple of HD trailers make the rest of the menu look slightly full.

Wondering about Burton’s thoughts on what happens at the end? Here’s the quote from the commentary:

“The people, like, wanting to know how and where and what time this is and all of that. That’s where you know… For me, I could be, you know, the audience of one on this, but to me I wouldn’t have taken it any further. I wouldn’t have explained any more, even if… whatever. If I could of or whatever. To me I, to me it ended up where it should have ended up, and that’s where I wanted to end it was on that sort of vibe.”

No, his explanation doesn’t make any sense, either.