To hate most of Pearl Harbor is natural. It’s not that the viewer becomes impatient waiting for the attack, it’s that the build-up to get there is simply a dreadful exercise in Hollywood schlock. There’s little doubt that Randall Wallace’s script is attempting to pull a Titanic, but at the least, James Cameron’s mega-budgeted disaster epic had some memorable pieces outside of the disaster showpiece.

The saga of the Pearl Harbor attack is an immensely gripping story. Tora, Tora, Tora did a masterful job back in 1970 of showcasing the true-to-life military side prior to the Japanese attack. What does the action-oriented team of Michael Bay and Jerry Bruckheimer give us?

A simply terrible love triangle for a full hour and a half.

Kate Beckinsale is stuck between Josh Hartnett and Ben Affleck, delivering hilariously awful lines. Characters sit by sunsets following a paint-by-numbers script that feels like it’s coming from a B-movie by an amateur. The performances are fine, but the dialogue is corny and unbearable.

Side characters have potential yet are rarely developed to their full potential. Cuba Gooding Jr. has a small yet significant role, and isn’t given the screen time he should have gotten. The same goes for Jon Voight, playing a critical piece of the story as President Roosevelt.

When the attack does occur, it’s unquestionably perfect. The intensity, flawless visual effects, and emotional drama are the reasons stories like this become films. Sadly, the Blu-ray version is not the extended cut which includes heavier gore, increasing the dramatic content of the battle.

After this, Michael Bay chooses to extend this already bloated effort by another hour to include the American counter-attack. The Doolittle Raid is easily as effective as the Pearl Harbor attack, yet feels unnecessary and undeniably like blatant propaganda so the good guys come out on top. The action is fine; its inclusion in the story is not.

Pearl Harbor makes the wonder of digital home media easily appreciated. Chapter stops make it easy to skip the aggravating love triangle and dive right into the attack you came to see. You don’t lose any of the drama, and you can still figure out all the pieces of the story that came before it. That’s how limited and clichéd the rest of the film is. 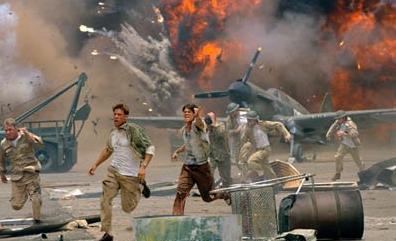 Beautiful color, stunning explosions, and rich detail make up most of this Blu-ray effort. Sadly, noticeable and annoying edge enhancement along with a fluctuating of grain (at times for effect) keeps this from perfection. Sharpness is high, if not too high, looking as if it was artificially played with. Still, there’s enough merit to this transfer to make it a far better presentation than the DVD. In close-ups, the detail is unmatched, and the ease of appreciating the special effects during the attack is remarkable.

With bombs, ships sinking, and planes surrounding the ordeal, this is the closest you’ll ever come to being in the midst of the Pearl Harbor attack. There’s little surprise to find the movie won for best sound editing, and this Blu-ray effort is flawless in preserving every piece of the audio. Bullets whiz by the viewer on a regular basis, explosions are greeted with meaty, thick bass, and underwater effects are an audio masterpiece. Non-action scenes deliver with atmospheric rear speaker use, including subtle bird chirps or passing cars.

Released on a two- and three-disc set on DVD, this one comes to Blu-ray with only a few extras. Journey to the Screen – The Making of Pearl Harbor is a rather exhaustive (and sometimes too promotional) behind the scenes affair. It runs for 47 minutes, covering all aspects of the production.

Unsung Heroes of Pearl Harbor is a History Channel piece focusing on lesser known people who made a difference before and after the attack. This runs for 45 minutes. Trailers and a video from Faith Hill are the only other included extras.