Both the Alien and Predator franchises were run into the ground with their sequels; the Predator meeting an earlier fate. It’s been ten years since we last had a run in with the Aliens and 17 since the Predator tried to tear apart Danny Glover. Both come back together in the longtime-coming Aliens vs. Predator, a meeting between two of Hollywood’s most vicious.

Killing Alien vs. Predator from the start is its complete lack of acknowledgment of the films that came before it. Writer/Director Paul W.S. Anderson claims to be a huge fan of both franchises, so why would he ignore them? The timeline is completely wrong, the Predator befriends a human (in what has to be the film’s most ridiculous idea), and it doesn’t even follow its own history. The Alien incubation period is absurdly fast compared to previous movies. It’s a mess.

The worst change you could do to this film is take away what made the originals such a treat for horror and sci-fi fans: the gore. No, it’s not the director’s fault, but the studio’s. Aiming for the PG-13 rating takes all the fun out of the deaths, not to mention the horrible cuts to get away from any scene that would be mildly brutal. Even the director’s cut, included on Blu-ray, is still not up to par.

There is minimal time spent on developing characters, not that it really matters anyway. The action takes about a half-hour to build, giving plenty of time to develop, yet it never happens. Going with another unknown female lead was a nice touch. Unfortunately, she is the only character you’ll  know anything about. If you haven’t actually seen a previous movie in the Alien series, good luck trying to figure exactly what it is the Weyland Corporation does.

The eventual “meeting of the minds” is the only thing that goes right, and it occurs almost exactly at the hour mark. There are two major battles stuck in between countless smaller ones. Those two are spectacular on a visual level and a real treat for special-effects fans. The combination of great puppetry, men in suits, and CGI is handled surprisingly well. Anderson went almost entirely for standard effects, using CG only when necessary. He deserves major credit for that, though it hardly makes up for the rest of the film.

Eventually, you realize the movie is nothing more than a 90-minute trailer. Every shot of the monsters squaring off seems primed to show up somewhere during the ad campaign (how many times do we need a close up of the Alien’s lip curl?). This is just too far from the other films.

It’s interesting to look back on the first film after the release of the sequel. The original is a better movie. The fights are better choreographed, the story stronger, and the audience is at the least given some idea as to what is going on. Time has made AvP a better movie, but hardly the great one it should have been. 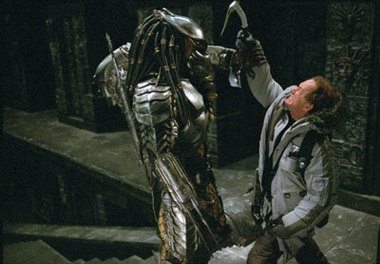 This is one of those lovely HD-format discs you need to continually check on to ensure sure you’re not watching a standard DVD. While close-up detail is typically incredible (look at the alien eggs), distant shots are tough. Compression rears its ugly head during multiple scenes, and light black levels lend the film a murky, soft tone. Once the movie moves underground, it loses any advantage of being in HD. Shadow detail is weak at best, and given the dim lighting, that’s a huge loss for this disc.

DTS Master Audio is the option here, loaded with heavy bass and decent surround use. However, the sound field doesn’t have the immersive quality it should. There are times when this sounds entirely front-loaded during the action. Fans of room-shaking effects from the LFE channel will be pleased as the creatures slam themselves around the room with spectacular effect.

Extras are brief here, and Fox has chosen not to include much of what the DVD editions offered. Fans of the unrated version will enjoy two options to see the footage, one which includes a menu option to view each scene without the PG-13 marker on it, and another which will deliver a logo during the specific shots as you watch the unrated edition. A trivia track can also play during the film, delivering facts about the warring races.

A commentary by Anderson (along with stars Lance Henrikesen and Sanaa Lathan) is a needed piece. Anderson points out many aspects he feels didn’t turn out the way they should have, and is actually quite critical of his work. The next commentary, making this the final extra aside from some trailers, is handled by the special effects team. Note the commentaries are only available on the theatrical cut.