Few moments of The Revenant are comfortable. Set among a winter chill, snow dusted trees, and freezing rivers, scenery produces a stunning backdrop. Each frame though gives the natural serenity a cost. Leonardo DiCaprio limps through most of the film, ravaged by temperatures, deep wounds, and broken bones, all signatures left by the native lands around him.

Camera work doesn’t offer a reprieve. There’s no distance between action and the audience. The lens steams up, is bumped, and catches stray blood. You’re forced to be there within a group of early 1800s fur trappers, sitting by their fires and ducking arrows fired in their direction. Long cuts are exhilarating – sensational filmmaking – drowning in violence which refuses to cut away. An arrow to the eye transitions into a lost leg then followed by a grisly stabbing. Revenant jumps between incidents of cruelty, pinning together a cruel revenge tale.

Films with this level of patience are rare. Attention spans are not what they used to be. Revenant recalls the hands-off camera discipline of 2001 – the medium is used to feast on stalwart visuals. Those visuals then roll into a narrative, surrounding gravely injured Hugh Glass (DiCaprio). He’s encased by forests which drift off into the horizon. He cannot escape; there is nowhere to go. Everywhere is empty.

Revenant refuses to coat hardship with comedy or brevity. Where say Cast Away joked and made an appealing lead out of Tom Hanks, Glass is understandably fierce. He kills, attacks, and begs for his life. Revenant’s luckiest quality may be timing. Cinema’s are currently flushed with perfect, clean heroes. This film is led by a rotting, crippled fur trader whose goal is only to kill. Whether for survival or retribution, Glass does it well.

Easily ignored by the powerhouse performances and enveloping cinematography is a keen historical exposition. Revenant’s American frontier story gives people purpose for their actions – Indian tribes left John Fitzgerald (Tom Hardy) scarred. He left their tribes in pieces. Fitzgerald closes down his sense of empathy, becoming the relentless loner who only concerns himself with himself. Few are more dangerous.

It’s possible to catalog Revenant under revenge cinema. The typical plot beats are there – a man carelessly left for dead rises up against those who wronged him. The title alone suggests something else though, a dazzling survivalist story (using true events only as a basis) backed by strength of character, reasoning, and beauty. There’s a mad genius to Alejandro G. Iñárritu’s direction. Like with Birdman, his work here is frequently unorthodox and unusual. Yet, the results reach a gripping peak. 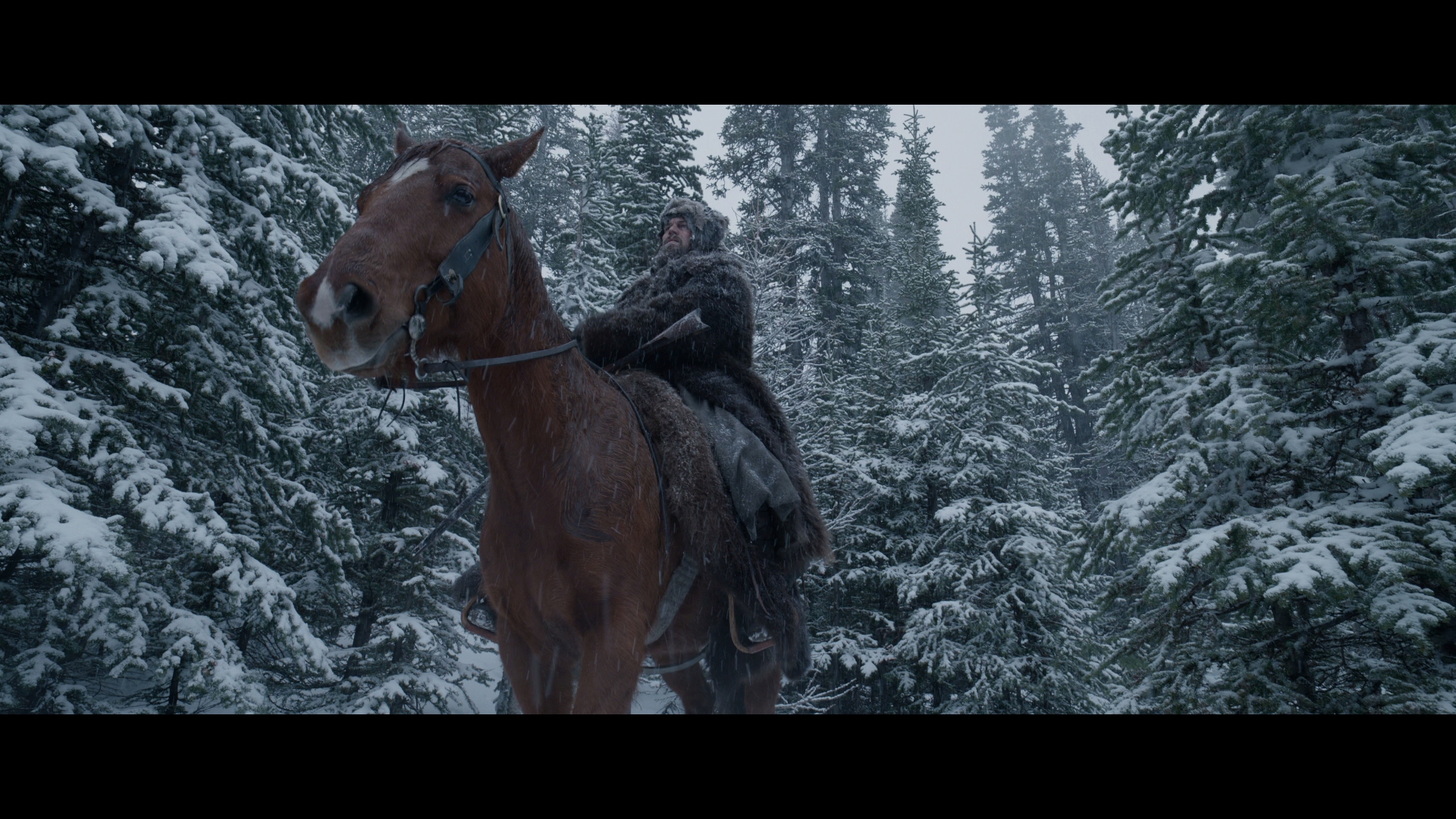 While Iñárritu attempted to shoot on film, the decision to use 100% natural light led him to Arri’s new Alexa 65. Few will disagree: This decision serves the feature well. What may be missing from an organic film stock is gained by clarity. Even as a hardened film-o-phile, digital cinematography adds a certain closeness and reality which better suits the style at work.

A slew of hyperbole runs through the mind when soaking this one up. Breathtaking and jaw-dropping are included. Shot in multiple countries, scenery is consistent. Revenant showcases flawless mountain ranges or provides enough source resolution to capture a near infinite number of trees. The chosen angles accentuate the scenic beauty.

Also necessary, fidelity in close shows accuracy. Attention to detail brings focus to the film’s ugliest moments, from images of Glass’ open gashes to dissected animal carcasses. When the camera moves in for a close-up, facial definition presents gobs of refined detail. The choice to shoot without false light has no apparent impact.

There are two color palettes, one lit by fire, the other clouded sunlight. Blues and orange, yes, but without gratuitous color grading which often over compensates. Revenant feels unusual for its natural tones. If emphasized in post-production, the colorist’s touch comes across as subtle.

Revenant makes the most of its shadows too, enriched by black levels which never recede from pure black. Contrast isn’t lost either. Scenes push adequate sunlight through the frame. Image depth mounts early and never dims.

If the Blu-ray is flawless, the UHD release is of absolute reference quality. Startling and sharp cinematography breathes substantial life into the scenery. Trees nearby or mountains far away – both deliver the extreme levels of fidelity expected of this format. Close-ups on ugly wounds add greater weight to the injuries. General close-ups pull the maximum expected of facial definition.

Digital cinematography offers flawless clarity, impeded by minor banding which happens quickly and is of little consequence. It’s an astonishingly natural looking film despite the rather depressed color palette. Don’t expect the heavy blues which dominate to leave much of an impression by design.

Premiere black levels produce much of the contrast. Whites come diluted by the dimming blues, although certain snowy scenery carries bite. Tremendous shadows bulk up, and without a loss of shadow detail. A phenomenal disc.

Capturing an organic soundfield which is at best even without action, Revenant earns all possible sound design praise. It’s rare to have dialog be this fluid in live action. There are no reservations about splitting conversations between channels. Even key dramatic sequences push lines into the rear channels. Additional surrounds within this 7.1 track are never without material.

Revenant’s soundfield is instantly alive. Forest sounds rush into the available channels. A slow upward pan to start captures a flowing river believable enough to think water is rushing into the room. Rain and winds are well cared for. The subtle drips of snow melting are splendid.

Conditions call for pronounced action. A late gunshot ranks among an elite class – the bullet audibly travels in, hits a tree to send bark overheard while the echo of the shot still rings out in open air. Revenant’s action high, an extended single-take assault on a trapper camp, uses arrows slicing through the air well enough to duck the action. Horses and screams ring out in a full 360 degree display of raw design. Think Saving Private Ryan’s D-Day assault, but taking place 120 years earlier.

A World Unseen is the featured 44-minute documentary, a stellar look behind the scenes, even if it this piece released on YouTube prior to the Blu-ray. A short gallery is the only only other bonus.

Revenant pits man against nature and man against man in a thrilling survival/revenge story – and it’s a winner on Blu-ray.