Sidney Poitier and Bobby Darin star in this undervalued classic

For whatever reason fate decided, Pressure Point has been destined to whittle away, ignored even as a progressive classic. The film earns little notice beyond dedicated cinema admirers, this despite Pressure Point’s sure-handed attempt to prod and understand – it asks why people hate.

It’s an unusually empathetic film, small, contained, but flush with insight into post-depression, pre-WWII race relations. Bobby Darin’s performance as a Nazi sympathizing patient to Sidney Poitier’s psychologist is alluring before a word is spoken. Pressure Point discards the cliches of film’s often disparaging mental health depiction. Straight jackets, screaming, and blank stares are eliminated for an unusually authentic peering into the mind of discrimination.

Darin fits into his character. Pressure Point is determined to source the spread of racism and flashbacks are part of it – Darin comes from a tortured childhood, a WWI baby born to an alcoholic father and manipulating mother. Pressure Point won’t place blame, rather follows the character through adolescence; decisions are his own.

Ignore the cranky score which boasts a wailing theremin; that’s a better fit for The Day the Earth Stood Still. Such music is mercifully restrained for the credits. Instead, Pressure Point finds thematic resonance in unnervingly claustrophobic black & white cinematography, forcing viewers into the same space as the uncomfortable psychologist. The camera stares at Darin who spouts Nazi propaganda after being imprisoned for inciting violence for his cause. Poitier sits silent, even somber, tight in the foreground, dominated. That position of power in the camera rarely changes, until the climax.

If there is reason for the film to be discovered, it’s Poitier’s exhilarating final monologue, blasting his patient’s blind ambivalence to an ugly cause. Distressing, Poitier’s words (“This is my country!”) fiercely reject a gross ideal which hasn’t changed. Darin’s belief in an “all-white Christian America” remain part of crude political dialogs. No matter how fierce Poitier becomes – here or via In the Heat of the Night – the words must bounce off their target.

Yet, there is compassion. Poitier’s postured, composed doctor becomes the hero, if Pressure Point must be broken down in such simple hero/villain dichotomy. Thus Darin is the villain, but one who has reason. Excuses, maybe, for a life with potential, rotted by a childhood which was impossible to escape. As torturous as Darin’s treatment can be to watch – stuffed with violent, surreal flashbacks and disturbing personality outbreaks – the impetus isn’t lost. 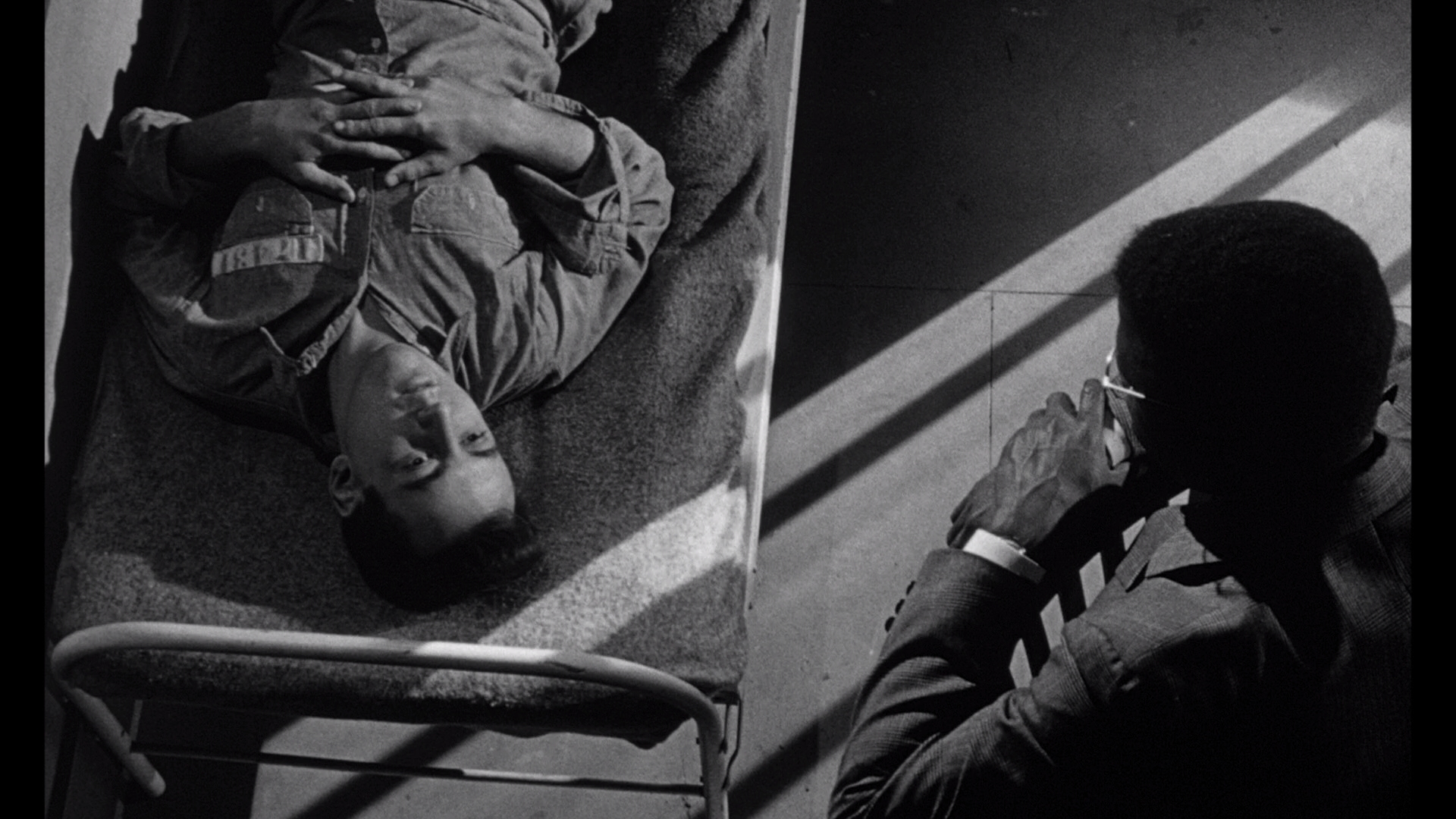 There are a handful of faults to the print. A flashback on a hill is inconsistently faded on the right side of the frame. During a late scene in an office, a shaky, faint, vertical line can be noticed on the blinds in the background. For the age, this is more than acceptable.

Excuse the lone moment where the score cranks itself too high during the opening credits. Focus instead on how well the bass is resolved. Instruments are precise even among the rather chaotic ’60s jam.

Clean DTS-HD mono pushes dialog in the same way, without any loss in clarity. A handful of dubbed over lines are easily apparent to no fault of this Blu-ray.

The original trailer is the only bonus, although it’s an eclectic one, totally indicative of the decade.