Disney (and Angelina Jolie) soar in this refreshed fairy tale

Maleficent is not a character study in evil. Devilishly playful, certainly, but not without quirks and charms which define this ultimate “scorned women” story. Angelina Jolie, made up with extraordinarily tall cheek bones and an impressive profile as the title character, adds the somber touch to corral audiences into a sympathetic story of impromptu motherhood in a realm of astonishingly bold fantasy.

Jolie is wild with an untouched performance marrying the delicious wickedness of Eleanor Audley in 1959’s Sleeping Beauty with a gentler, at times accidentally compassionate side.

In this way, Maleficent brings together the storytelling artistry of old Disney and the contemporary humor of a more cutthroat, broadly entertaining Disney fairy tale update. None of the action reeks of the tightly clenched seriousness of Snow White and the Huntsman or the unchecked absurdity of Tim Burton’s Alice. Often, Maleficent is raw beauty, celebrating the silhouetted form as a sign of unnerving danger and the splendor of daydreaming colors in fields teeming with life to celebrate good.

Contrast is often a focus. Maleficent herself jumps between allegiances of evil and motherly heroine-ism with deep divides cinematically. While much happens inside of the digital effects domain and green screen, framing on the part of cinematographer Deam Semler is pure splendor to a point of being egregiously overdone. It matches Jolie’s work.

This world feels complete, soaking up the opportunity to give life to pencil and ink drawings. Floppy creatures frolic across the plains and the three mismatched fairies bicker endlessly as comic relief. Unlike other adaptations in this middle ground trend of fairy tale re-imaginings, Maleficent has no interest in reality grounding – let the zaniness ensue.

Pieces of steroidal action break from the character development and sublime pacing, done with all measure of stunt work at the cause of an obstinate king, Stefan (Shartlo Copley), acting as an unmistakable narrative counterweight to Jolie’s elf/fairy-ishness.

It turns out that Maleficent (despite torturing those who hold Sleeping Beauty’s simple story curves close to their heart) is right in assuming the villain is consistently more interesting than a hero. The film has work to do, but singularly credited writer Linda Woolverton’s conceptual strength is mammoth. Maleficent is affectionate, modernistic, and wholly charming – a high point in Disney’s vault of live action classics. 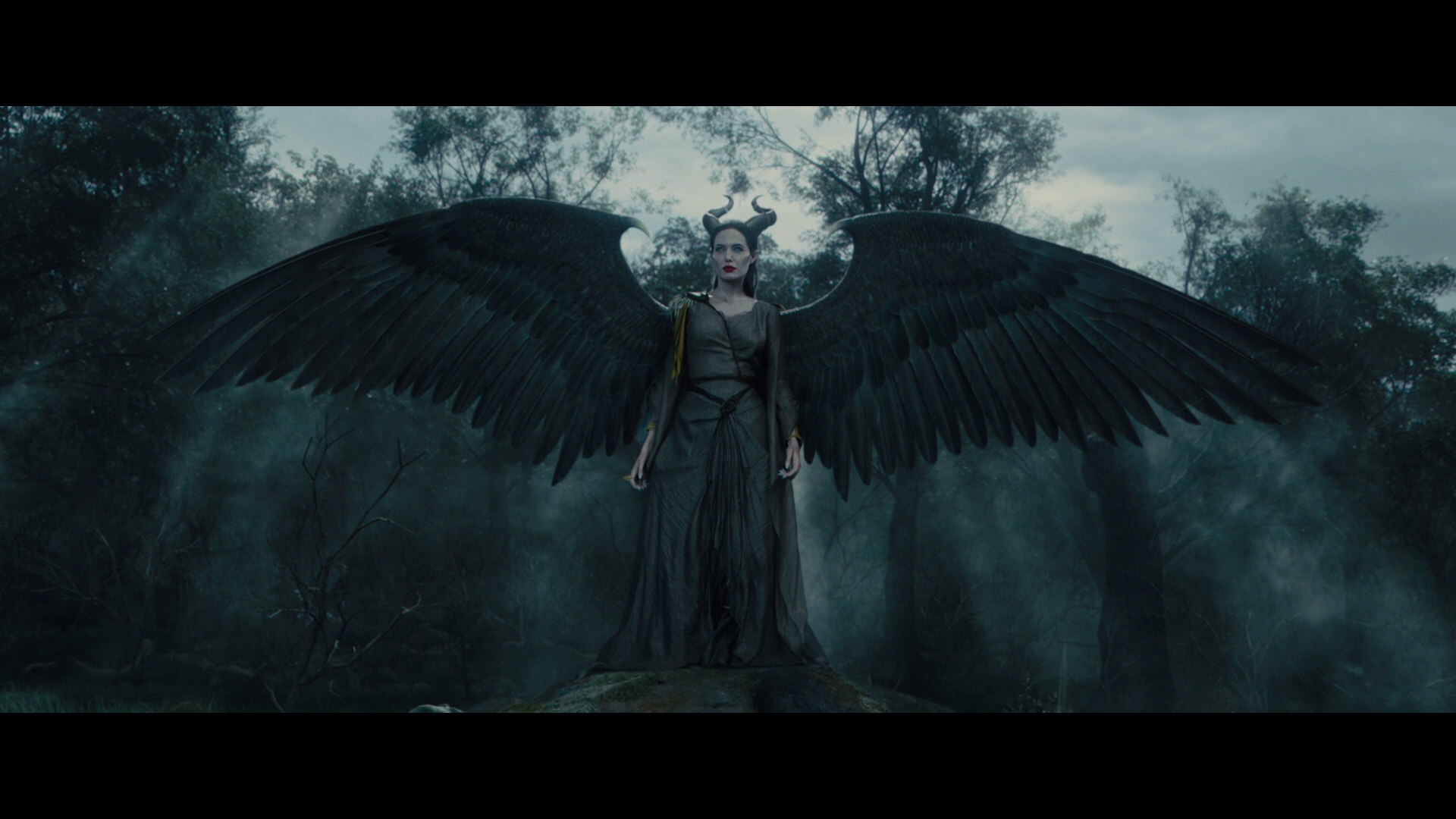 For all of the immense visual beauty on display, Maleficent employs a number of filtering processes with are neither beautiful nor consistent. At their center is Jolie herself who is aggressively smoothed over to give her a ghostly appearance which is certainly not human. The effect is frequently garish and even misplaced; there are spots where skin texture still shows through, killing the intention. Even still this carries over to a key battle scene with a king softened and filtered which has little sense applied.

The rest, not accounting for Disney’s putrid decision not to release the 3D version locally, is gorgeous and often reference material. First and third acts are book ended with colorful highs, bleeding contrast and intense saturation. Fields of grass and deeply blue streams collide with lush sunsets with varied costumes fluttering in front of it all. A sense of fancy is alive. Maleficent’s center then breaks down into constant patterns of blue and flame lit oranges, a familiar palette without much energy if enough pull to suit the complexities of the narrative.

Disney AVC encoding is flawless, offering bitrates which teeter on the format’s maximum settings with a touch of noise a source leftover from the processing. Shadows are magnificent too. Deep black levels create a sense of creeping dread which continues to impede on the images the deeper into evil it goes. Final castle scenes are struck with hardened shadow lines to accentuate the weight of conflict without losing the disc’s sense of clarity or fidelity.

Audio design must embellish a world, making something wondrous and fantastical breathe sonically. It does. Forests are a feast of activity in all channels, from insects buzzing to birds chirping. Positioning is in constant flux (in a good way) without any give or slowdown in the 7.1 staging.

While dialog is happy to sit centered, there are those moments of breathing where the fairies bump one another into a different channel or the tone needs a break to establish a character’s spot in the frame without a visual cue. It’s all considered and considerate of home theater set-ups.

Of course there is a level of bombastic LFE, rumbling tightly as war erupts on screen to satisfyingly crush any sense these battles are small. Collisions and horse hooves hammer the low-end and the varying levels of depth offered, from subtle spell casting to flame spewing dragons on the opposing side, are layered flawlessly.

Short bonuses cannot capture the full breadth of this production, and rather glimpse at different areas with a similar style for a pitiful half hour total. Aurora: Becoming a Beauty focuses on Elle Fanning’s casting, role, and performance. From Fairy Tale to Feature Film details the transition from animation to live action and why the approach was different. Building an Epic Battle lingers on a key first act action set piece, detailing stunt work and planning.

Classic Couture is a brief look at Jolie’s horn headdress and Maleficent Revealed is a reel of effects work which shows the tremendous effort in creating this film’s world. Five deleted scenes, some seconds long, are left.