Godzilla’s reputation was stained for decades (and still is) after the abomination of Megalon, a film so tragically under developed and considered, few Stateside would view rubber suited giant monsters adequate ever again. Not only was the cycle of Japanese importation dead after 1973, so was the true Godzilla’s U.S. legacy.

Time is a healer. It always is. With perspective, Godzilla vs Megalon is a goofy kitchen sink ’70s flick of car chases, fist fights, comedy bits, mega robots, aliens, undersea citizens, and nuclear fallout. Toho’s illogical feature projects a charming type of incompetence, blind regarding day or night and it regularly enters an editing tizzy. Mistakes are gratuitous, but the film wouldn’t be the same without them.

Slop or not, Megalon’s pacing rapidly segues into streams of monster action, showcasing an unhinged creature design with the flying robot bug Megalon and a space chicken from the prior year’s Godzilla vs Gigan. Human inventor Goro (Katsuhiko Sasaki) makes his premiere invention for the side of right, the meme and pop culture invading Jet Jaguar, who inexplicably teams with bulbous-eyed Godzilla to march on the offending kaiju duo. The nonsense is so wonderful it stings.

Riichiro Manabe’s flighty score has a blast slipping between genres and chirpy tones, from screechy twangs to brassy fight songs, almost all of it being universally unpleasant. Something has to connect the influx of stock footage, culled from the early ’60s at times because of desperation and regardless of continuity.

Without Haruo Nakajima inside of the Godzilla suit for the first time, first (and only) timer Shinji Takagi shows no sense of character. Toho’s icon stumbles around dirty miniature sets, complete with flailing hands and sign language. Godzilla vs Megalon signals the most infamous of all genre scenes (more so than Hedorah’s flame breath flying sequence), which finds the radioactive hero sliding upright on his tail to dropkick his new foe. Calling it absurd would be kind.

Megalon bides its time. It has to: Godzilla doesn’t show up for an hour, meaning this paper thin script has to drum up some enthusiasm with Robert Dunham attempting to salvage this thing as the king of Seatopia, a tortured underground civilization. For reasons unknown, Japan has begun frequently testing nukes below the surface, igniting this barren war where villains spill entire plots to the heroes and continually find themselves knocked out by punches, model airplanes, or the ludicrous production design. And consider this: Godzilla is actually defending Japan’s rights to use nuclear weapons in this movie. Two decades prior, he was the bomb’s physical embodiment.

While many bad movie fans linger over the drudgery of Manos: The Hands of Fate or mingle with Gamera’s worst, it’s Megalon which offers premium schlock entertainment value and otherworldly color to an obnoxiously dopey film. In that way, this accidental dud wiggles into classic status – cult classic anyway – but for Megalon, that’s more than it could ask for. 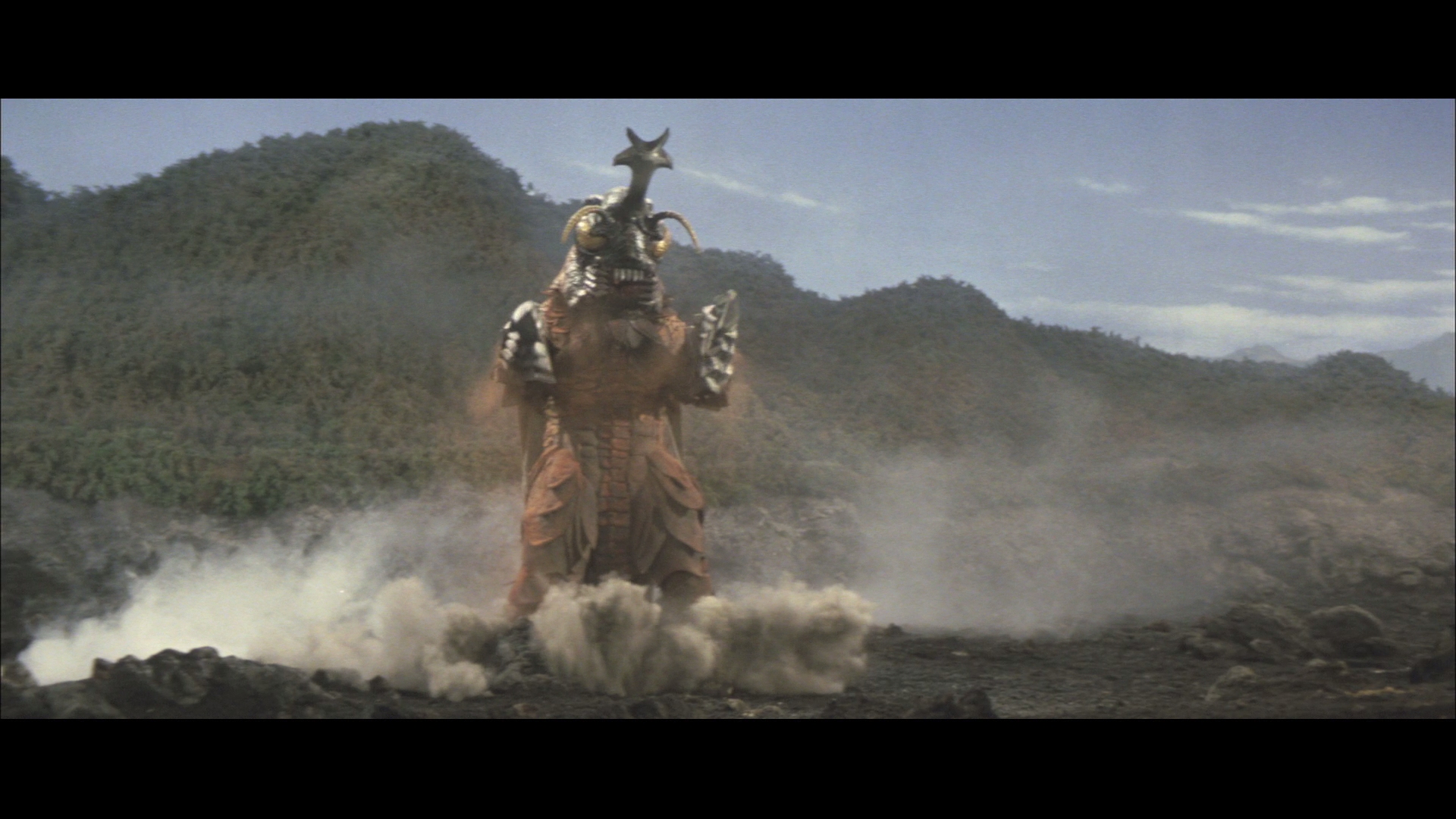 Media Blasters takes almost two years to release this quintessential mockery to Blu-ray and does so by delivering their same DVD master to Blu-ray. It’s troublesome. However, there are positives, including a mild resolution boost. Fidelity is slightly tighter despite the softened source, and grain management (for what minimal grain there is) rarely loses control other than situations of heavy dirt/smoke/fog. Work on the print appears excellent too, removing many of the dings and scratches.

But, staying with the print reveals an anomaly which can occur both on the bottom or top of the 2.35:1 frame, typically on the bottom. Each edit (all of them) contains a one frame hiccup where a fraction of the next frame is visible before the cut. It’s varying in terms of height and distraction abilities, possibly some artifact of editing on the multi-generational print itself. This is not an encoding error, although Megalon has plenty of those too.

Notably, the disc potentially reveals itself as a 1080i source due to an abundance of interlacing issues when amongst fast moving action. Helicopter blades, flying monsters, and even Godzilla suffers this fast moving if no less apparent flub.

Finally, like Media Blasters’ Destroy All Monsters disc, IRE levels are incorrectly set. Megalon feels coated in dreary gray and colors are washed out significantly. Image depth has been completely voided. There is no sign of black anywhere despite the influx of scenes at night while the colorful costume of Jet Jaguar is nothing other than pale.

Three audio options are available, all in DTS-HD. Dub lovers are given a 2.0 mono track which is clearly fading out of existence with audible warping and straining of the score. Dialog is coarse, lacking natural clarity. Original language fans are then given a Japanese 2.0 mix, the best of the trio with natural fidelity. Dialog is crisp and the score is gorgeous as it comes through the front soundstage. Aging is notable, just minimal.

As the third selection, mastering work on the 5.1 track is abysmal, even if it gives the feature a bit of sonic space. Positioning is nill, with the score fitted into all channels at once without any subtly. Surround effects are cloned into each back and fronts at the same time, with fleeting LFE applied.

Originally, some DVDs slipped out full of bonuses (including a commentary) despite those extras being against Toho’s wishes. Those remain a collector’s item and still are. This Blu-ray is barren with nothing to offer.