Can Chris Pine save America’s stock market and help reconnect the Jack Ryan character to modern audiences? Probably not, but it’s a good Blu-ray from Paramount

We need Jack Ryan because 9/11 happened. So says Shadow Recruit, a reboot/origin story of the CIA’s hyper intelligent agent who once saved the president, stopped a nuke, and was Harrison Ford. It’s an impressive resume.

Here, Ryan is after a steely Russian, Viktor Cherevin (Kenneth Branagh), who plans on sinking America’s finances with terrorism. Ryan (Chris Pine) chases down numbers on computer screens which leads him to recognizable Russian locales (“The Kremlin!”) and a handful of flashy action numbers.

Adam Cozad and David Koepp merge their work for this resulting script, a rushed and sometimes dazed thriller. Investment in Ryan’s personal home life, namely Keira Knightley, lazily restricts the narrative into a distressed damsel routine of menial consequence. It’s an excuse for a nighttime vehicle chase and crunching collisions.

Shadow Recruit often feels stunted without progression, sitting Pine in front of the lens with his paranoid stares as he slaps a keyboard to infiltrate opposition digitally. Exposition set up languishes and Ryan himself spills information in excess as to relieve any mystery.

Plotting is forced to hinge on a few action set pieces, some solid, some egregiously edited. Fisticuffs inside of a raging sewer deploy an original locale but wash it over with jump cuts and imprecise visual establishment. Punches are thrown, but by who is a better riddle than those in Shadow Recruit’s story.

Chris Pine is fine as the rookie Ryan. Harrison Ford’s bottled experience was a presence as much as Pine’s naivety is here. Pine’s Ryan comes with integrity and rich patriotism, a proper choice to battle for the sanctity of American dollars as a Russian fuel pipeline project is condemned by Stateside political leaders. Certainly through his Star Trek roles, Pine has proven himself capable amongst high dollar skirmishes, and here doubles that with screen presence. He is only bested by Branagh’s slick stare downs, possibly because Branagh directed this one too.

‘Forgettable’ is the dominating clause which hangs heavy over this pedestrian excursion. It exists because the Tom Clancy character is persistently part of pop culture, not because it was necessitated. In refresh, a generation receives their Jack Ryan, splashier than the soon-to-be-assigned desk work Harrison Ford interpretation, while lacking the mystique and intangibles which elevated those dual Ford-starring features. 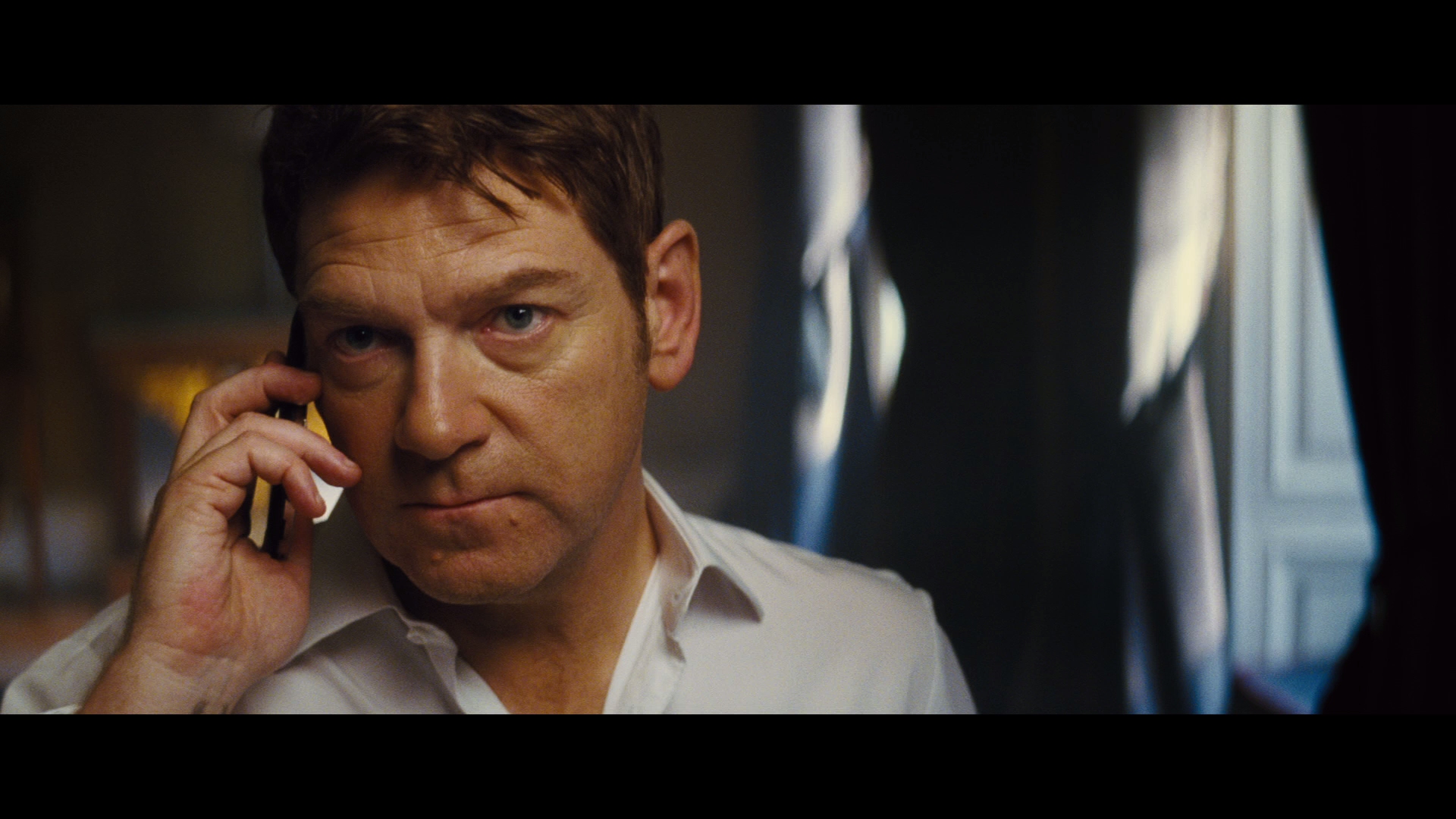 Paramount has to contend with a film based source, providing a plucky AVC encode with a stand out bitrate. Noise is kept to a few scenes where the source spikes and is rapidly extinguished with an edit. Source film grain is otherwise maintained cleanly.

In doing so, images stay pure with a suitable crispness. Close-ups are frequently presenting substantial definition. Resolution douses the screen in aerial shots of London, Russia, and Detroit. There are no complications here. Cinematography is the only cause of fluctuation, and at times overly fuzzy as images sort themselves out. This is no fault of the disc.

If failing, Shadow Recruit can be docked for mediocrity in black levels, lowering into dulled grays without impact. Depth is thus squandered during certain night scenarios, with a loss of potential dimensionality. These drops are notable for frequency and even randomness. Sometimes, a pick up is a few shots away in the same scene.

Disinterested color grading veers toward bright orange for flesh tones and those opposing blue backgrounds with frequency. If colors pounce, it’s usually left to aerials of cities. Expect no explosions of primaries here. Shadow Recruit is formed from typical and contemporary post-production tweaking.

Give this disc space for its adherence to dynamic range is limited. As a missile blasts a helicopter early, the explosion and fall are viciously loud in contrast to dialog. Later scenes, including a vehicle chase, appear respectfully dulled in comparison.

The full 7.1 soundfield is extended lightly, mostly to keep gunfire directional. Inside of a hotel room, glass and ceramics are shattered by impacts as ejected bullets ping off the ground, while this sound mix keeps providing widely separated speaker usage. Frequent splits of the stereos are balanced cleanly, with two additional rears finding material to process with less consistency.

Impressive is the replicated acoustics of a theater. Ryan sits center with the echoes naturally bleeding over him to keep the sound contained to the room. It may seem passe, but the mixing work is ample. More to the point is a flurry of deep gunfire and a climactic explosion with plenty of LFE driven power.

Actor/director Kenneth Branagh and producer Lorenzo di Bonaventura combine forces for a commentary track, with Smartest Guy in the Room setting up the rest of these featurettes. With 13-minutes to work, Smartest sets up the Ryan character through his film-based history with a focus on Pine (of course). The Tsar of Shadow Recruit unfortunately follows, and sinks to the level of promo in celebration of Branagh.

A Thinking Man of Action is a routine peering into action/stunt work and Old Enemies Return looks into the reasoning for using Russians as the villains. Some deleted scenes (five minutes worth) with an optional commentary end the home video edition of Shadow Recruit.