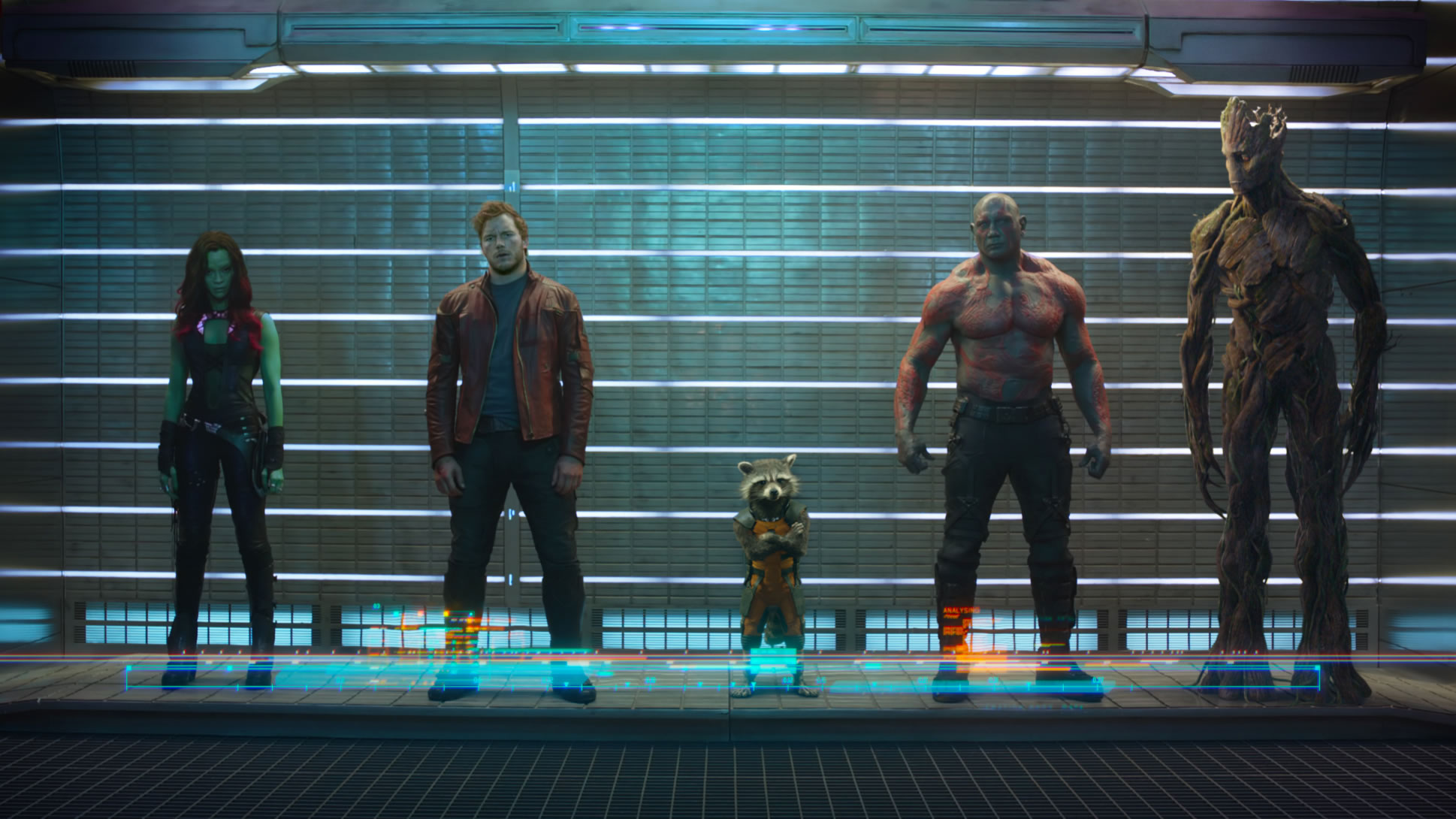 Guardians of the Galaxy is Marvel’s cinematic mix tape.

That mix tape holds a splendid score, a continuous helping of ’70s pop hits, and a script from newcomer Nicole Pearlman & director James Gunn so reliant on Marvel’s formalities as to render the narrative a throwaway.

It plucks the fashionable dynamic of loosely co-existent heroes from The Avengers, sprinkles the necessity of a universe threatening object over its action, and squirts in place a barely identified central villain who could be little else.

Maybe there is a sensibility we, the audience, have been trained and lured into this. So out there is Guardians, it tips the logistical scales with a talking rodent and his tree compatriot. This is the side of Marvel’s comics they typically hid from mainstream audiences, where names such as the twisting Yondu Udonta and Korath are spoken with ease. Once, this film studio strove to make Iron Man a real entity – or at least as real as something of his ilk could be. They crafted Incredible Hulk into emotional metaphors of confusion, loss, and uncontrolled rage.

Now we have pro wrestler Dave Bautista in rusty make-up battling the green skinned Zoe Saldana. What a world.

Star Chris Pratt is Guardians. His heart of nerdy sarcasm and wit are genuine, bucked up with a physical performance built by pelvic thrusting. Surrounding him is a cavalcade of faces – some digital, some not – in an onslaught of slim purpose. If anything injures Guardians, it is said purpose. Interconnecting these satellite films has demanded leash-led stories which must tightly conform to standards. Universe traversing or not, this is the umpteenth time the studio has produced a story about shiny objects of unequaled power and the pockets of evil who demand them for their maniacal sense of control.

Maybe narrative is secondary. Being honest, most of the broadened audience for this contemporary slate of comic-based productions ignores the mental trapeze act needed to link features together. To them, they’re singular event pictures, and Guardians is a joy when left to its own. The look, the timing, the blasts of comedic ingenuity; this movie has no fear. Without being melded to the procedures of logic, it’s free to extend an offer to Vin Diesel as a creaking alien tree or pop Bradley Cooper behind the mouth of an antagonist raccoon named Rocket. The personality bounce between them, brought together in a unified quest for futuristic currency, is a the same disconnected rag tag group we expect from decades worth of space sparing sci-fi.

Actually, cut the “sci.” Trying to appease science fanatics or even considering pieces of Guardians to concede to scientific thinking would be giving misplaced credit. Guardians puts things on screen because they’re visually enticing. It turns out that expanses of galaxy nebulas are fine backdrops in cinematography, even if that becomes their only purpose.

In some way, it is inherently frustrating. Guardians, more than Iron Man or the burly Thor, has a reason to escape form factor. Instead, it’s sucked into a pseudo-reality of miniature science and forceful exposition so nearly $200 million can scatter in pieces across heat soaked summer screens. For that, it’s tremendous. Expecting a break from the dousing of super heroes or a shattering of their concepts is apparently too naïve.

Note: The following technical critiques are based on location experiences. Such reviews are not scored and should be considered as generalized guidelines given variations in theatrical projection/audio systems.

With the Arri Alexa pulled into duty, Guardians’ peers onto theatrical screens with a familiar dazzle, if coupled with a notable softness. Close-ups may dazzle, but detail seems to wander due to cinematography and possibly a dab of filtering. It’s not uncommon in this current slate. This is one of the more colorful of the Marvel canon, with brilliant use of hues and spectacular wide angle shots of cities and space. Rarely is this feature dampened by a digital intermediate striving to lower the color quotient. Hurtful are the black levels which offer limited support indoors, even if they astound in the vastness of space. By its climatic moments, with the razzle dazzle of firefights, none of it matters anyway. The sheer fidelity of the computer work is… a marvel. Sorry.

Of course, the audio mixing is premiere work, stretching action scenes in a way more action films wish they could. Variety is high, and even if sound design is borderline passe (or exaggerated), mixing work is superlative. Subtle uses include ship interiors humming deeply during base conversations, and then ripping it apart when explosiveness (literally of course) catches fire. Dominating almost seems too calm an adjective for when Guardians is hitting one of roughly a dozen peaks. Shoot-outs are gloriously active, and sheets of sparks enjoying falling across the whole soundfield. No doubt this will be premiere work on Blu-ray.