Needless or not, this 300 sequel is a treat on Warner’s Blu-ray

As Leonidas stood with his Spartans to slash at Persians in 300, Themistokles stood with his farm bred Greeks to pierce their rival army at sea. At least, that story proves enough fuel to spend $100 million recapturing the quarts of spilled digital blood and dynamic aesthetic for Rise of an Empire to exist.

300’s events take place in the middle of Empire, creating a sequel which is both prequel and sequel. Marketing would appreciate the “equal” terminology (as noted by bonus features) in reference to the side story, although such a designation feels disingenuous.

Sullivan Stapleton follows the leadership arc of Leonidas in leading his Athen troops by yelling and spouting off manly dialect about war or sacrifice. Casting is still based on measurable and apparent musculature, certainly exhibiting a mythical lens into warped historical context.

To its credit, Empire captures a dose of tomboy femininity as Eva Green dons armor to set on a warpath against her native Greece. Her Artemisia is built on torture and rape, despicably so if brandishing an understandably thorough hatred for her rivals. Even if this descends into an impossibly hokey and pitiful sex sequence, Green’s screen tenacity is notable while fitting into the framework of violence without subtly.

If this dawns as familiar – it is. Empire coasts on vividness before settling down to recuperate, building a paltry handful of characters which allows focus on the “not for the squeamish” offensive assaults. Structurally, comparisons to 300 are dazzling in their sameness.

Visually is where new director Noam Murro and otherwise strong cinematographer Simon Duggan splinter, lost in-between measures to clone yet differentiate their cinematic palette. Empire washes out with a weaker grain and same post-production, green screen infatuation, but none of the graphic novel induced density. While battalions of ships on eerily calm, CG waters are intense, memorability is reduced to zero. Cliff falling, bodies warped into a tree, and Meme generating kicks are lost. Where Snyder’s work induced praise like “visionary,” this is raw 3D bloodshed without uniqueness.

As its own thing, Empire is inoffensive for its existence. Vile and gross swatches of unnecessary stabbings are the stuff of politically favorable, “For the children!” speeches, if sickly entertaining given the elaborate context. Stapleton isn’t the man’s man Butler was in his 300 role, but this also serves to overwhelm the forces of democratically strong Athens. They appear to have less of a chance against a devious and head strong female than those Spartans ever did versus the flamboyant Xerxes. 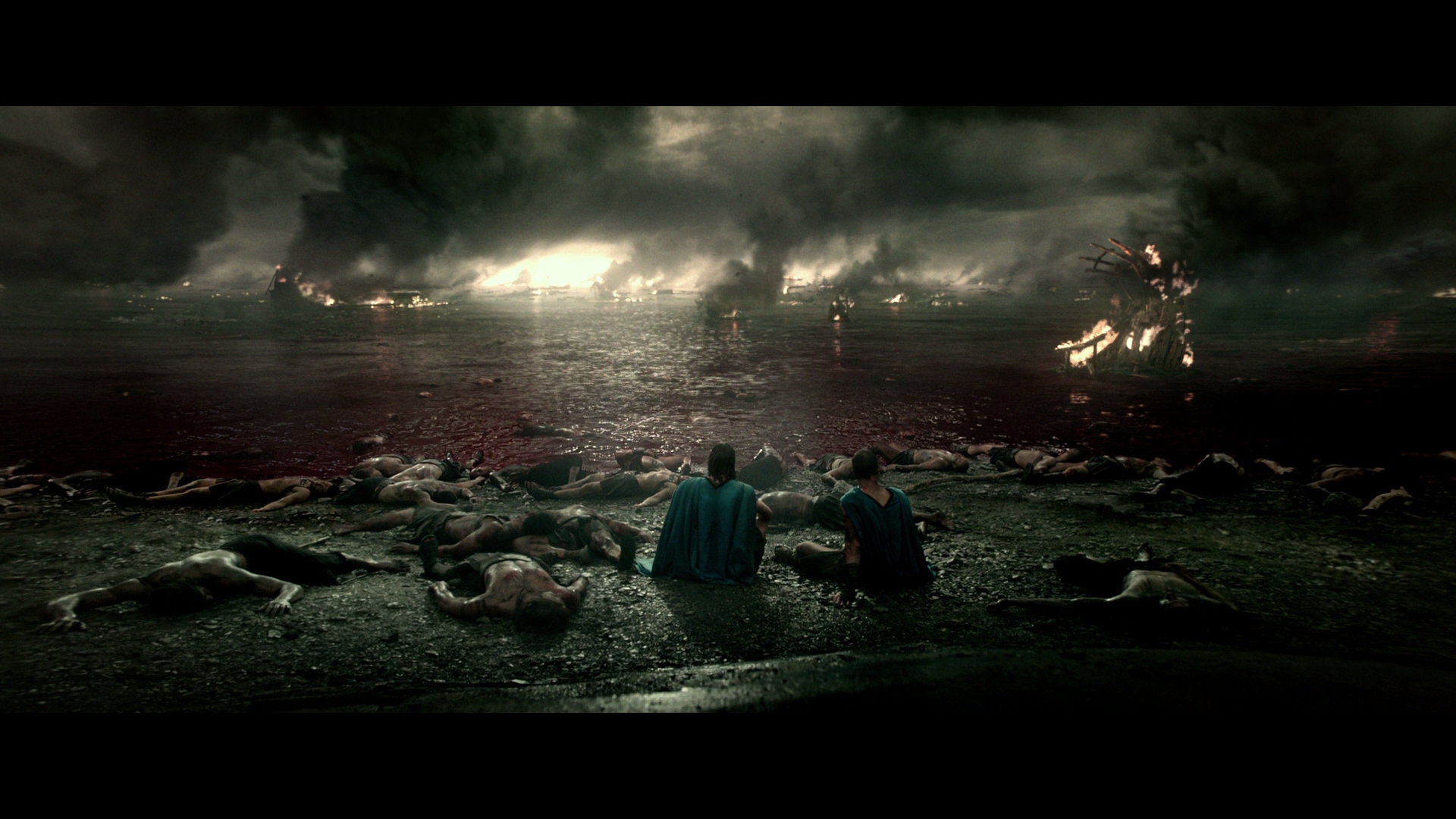 So much of Empires is background processing at the source, trying to layer complaints about flattened facial detail or buzzing medium shots are nothing but a guess. They exist, but to what extent (source, Blu-ray compression?) cannot be assured.

While ultimately a mimicry of 300 with a bevy of examples regarding crushing blacks and fiery facial definition, there is less to process overall. Simulated grain is layered over digital work from the Red Epic, but here is minor enough to be of light consequence. Some banding within some fog is the worst of the (possible) encoding quirks.

Gold and red dominated the landscape prior, shifting here into a variety of packed blues which are equally striking. Blood is darker without the consistent vibrancy, making Empires denser and less willing to pull from its selection of hues. Both ends of the contrast spectrum produce crushing results, with vivid whites adding sizable brightness at the expense of details.

This feature is impressive in HD even if the style under performs in terms of fresh appeal. Resolution is sharp and a showcase for most sets. Close-ups are dizzying with their depictions of fidelity, becoming increasingly sweaty and blood drenched as Empire moves forward. Despite inconsistencies, it’s a stunner.

Then 3D happens, and it’s a wash. Inconsistent application of depth wanders over certain shots, with those taking visual precedence (slow motion in particular) soaring with their layered effect, and those lacking such punch appearing minimalist. There is no bravery exhibited over of much of this sequel’s 3D application, which often tries to hide the effect by using lens debris at the front most effect. Instead of being effective, it creates a dominating wall from which nothing else can extend forward less the idea be ruined.

Warriors from both sides feel squished and laid out like cardboard standees. There is more push from ambient effects such as embers coasting by or strengthened light peering in from background sources than actor placement. CG effects, in particular blood splashes, can induce some flamboyant use of the format, if still weak overall.

Battle bruising audio is given a 7.1 mix to play in, which includes yelling and screaming in all directions with piercing stabs placed appropriately in specific channels. Arrows are slung around or tracked, and the track masterfully moves around with the lightning. Waves run up boats to accentuate scale, and explosions will pump themselves into each channel. Those additional rears are not wasted.

Missing here is LFE, at least to the extent of matching the sheer size. Boats slam into each other with a rumble, yet without dropping too deep to full encapsulate the mass. Oil will ignite with an equal loss. This is heavy work without full extension which proves disappointing considering the potential.

The 300 Effect leads off with four sections of EPK featurettes, from the effects to story generation and casting. Droll, but informative. Real Leaders and Legends pulls in authentic historical context and spends 22-minutes doing so, making it a worthy addition.

Moving on into Women Warriors, this bonus pulls double duty in focusing on Lana Heady and Eva Green’s roles. Savage Warships spends time with production designer Patrick Tatopoulus as he tries to deliver authenticity to guess work since it’s unknown how these ships actually appeared. Finally, fitness buffs can view the actor transformations in Becoming a Warrior, although this is short at a little over four and a half minutes.