Sidney Poitier’s confident anger swells through the deeply southern town of Sparta, Mississippi as he is inadvertently swept up in the naivety of a local murder investigation. Virgil Tibbs (Poitier) is accustomed to progression, not cotton field plantations and Confederate flags for license plates.

That places In the Heat of the Night as a film on the cusp of change, where cinematic techniques were broadening, the country’s societal shift was uprooting old guard, and remnants of vanishing ideals were grasping to save themselves. Poitier’s insertion into the murder of a local businessman is unwelcoming, with racial fires sparking between moments of cautious disrespect.

Rod Steiger collides with Tibbs, co-starring as the local police chief William Gillespie. The character is riding noxious hatred and documented streaks of baseless anger, an archetype meant to be molded into patterned form. Instead, Heat of the Night plunges into central themes with Gillespie mowing down expectations, with an eventual understanding and admirable respect.

Vicious stares become a Poitier hallmark in a film jettisoning cartoonish depictions of racial bias. Of 1960s features, Heat of Night’s approach to color division is stout; Tibbs is in a position of unacknowledged power as opposed to fighting from lower rungs, using the scenario as societal leverage. His work is a, “kill them with intelligence” mantra, although those methods are not without physical intervention.

Heat of the Night is a film of its era – an important one. Race relations are common dramatic arches for cinema, while few were graced with the liberty of lessening MPAA restrictions while being made amidst the chronicled period. Plot devices weave into uncomfortable abortion, brazen for the era, but Heat of the Night treats it with civility, not shock. It’s a necessitated piece of this murder investigation, nothing more.

Norman Jewison directs with a focus on sweltering conditions, a film with restless cinematography and broken air conditioners, creating an audience placebo effect. Content alone is cause for squirming in a seat, while the conjunction of implied Mississippi heat will force droplets of sweat to form.

By close, the film finds its killer, if no solutions to the impact of the Civil Rights Act on Southern thinking. Tibbs and Gillespie discover menial common ground through their work, even snippets of their personal life. Their ways do not change. Sparta will continue on its reluctance to accept critical American history, and Tibbs will be reunited with his Philadelphia unit. Heat of the Night is a film of forced compromise and in its methodology, captured a historical snapshot of a country unwinding from precipitous change with the perspective of the all-class Poitier. 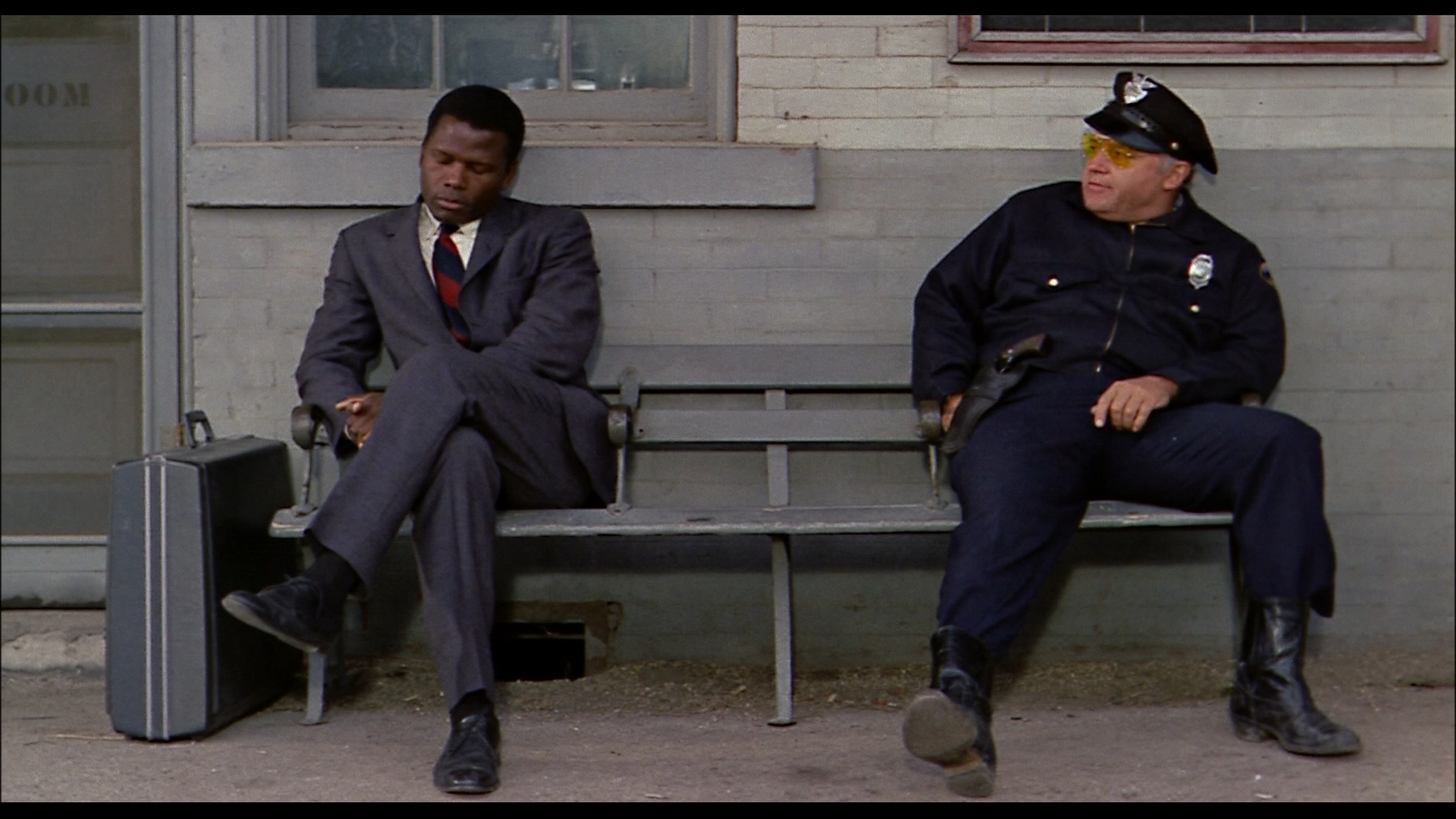 One of MGM’s Best Picture winners, released by Fox to Blu-ray, has been treated with careless respect and deplorable mastering. In the scheme of disheartening transfers, Heat of the Night closes in on the championship, a film of importance squashed by imbecilic decisions.

Heat of the Night does not appear digital. Instead, it looks analog. Grain has been mushed to mirror the noise signaled by meager composite video cables. Color slip ups bleed into a moire-esque patterns, hazing faces with strands of green or blue. Aside from the visible uptick of resolution, Heat of the Night would be at home on Lasderdisc. This does not appear sourced from film, but rather a tape shipped to a TV studio for broadcast.

There is evidence of filtering and other tinkering effects, although not to modern levels. Smeary grain upon movement exhibits effects of early generation LCD screens. It is abhorrent during the chase through the wooded area. Trying to make sense of signs in the background is a pointless endeavor; resolution is mastered pitifully low to mirror low resolution textures of a video game. Areas of hefty edge enhancement will seep in to work up a cartoon effect, as if someone drew on the print with pencils.

Typical elements to dissect on Blu-ray (such as codec) are rendered meaningless here. Imagery is undoubtedly noisy with or without the sizable AVC encode. If compression is further bungling the problem, the end result is minor. Be happy the print exhibits few flecks of damage and minimal gate weave. It’s progress.

Some of the tight cinematography will cast an eye for close-ups, the type of shot contained enough that a host of bothersome quirks are voided by default. Even a slip up or two will produce stout facial fidelity, if quick to be whisked away upon edits. These brief glimpses show what Heat of the Night’s visual spectrum could have been. If this is how MGM plans on celebrating their 90th anniversary, it’s going to be a tough year for catalog lovers.

While frequently centered, the DTS-HD audio accompaniment will venture forth into a 5.1 soundstage with mixed results, and no mono option to help. Trains will break to the sides as they pass, adding an artificial clarity to the effect. The same goes for ambient audio, at least outside of chirping insects which are purposefully raised to coat opening scenes. Dialog is naturally graced with age.

Key to all is Quincy Jones’ score, and despite misgivings regarding effects, music is fluid. Fidelity is pure with bleed into the stereos (and to lesser extent, the rears) wraps up the themes naturally. The benefit of the move to Blu-ray has been this effective period musical touch.

It’s MGM’s 90th birthday so let’s… rehash DVD features? So goes the logic at Fox, and into a commentary we go from director Normal Jewison, cinematographer Haskell Wexler, actress Lee Grant, and actor Rod Steiger. Turning Up the Heat is a making of and social piece, detailing the impact of the feature with multiple filmmakers. The Slap Heard Round the World is a seven minute dissection of a key scene, again from social and filmmaking angles. A 13-minute featurette on Quincy Jones’ score is the last bit on the disc.