Introduced with (then) modern animation of Gumby, Pokey, and low key Artie the Dinosaur (who bears a striking pot belly resemblance to a misshapen T-Rex in the 1981 comedy Caveman), this framing device shifts into Pal’s produced work. Ten of his miniature features segue into one another briskly, with no conjoining elements. They exist together purely to excite and celebrate some legendary animation work.

These stories are fables, fairy tales, original concepts, and children’s entertainment, all fitted with impressively detailed motion and carefully considered surrealism. While modern animation cinema blurts out ideas of friendliness, Puppetoon is ready to terrify. “John Henry and the Inky Poo” closes on a dour note, and “Jasper in a Jam” may be musically colorful, but surrounds its child protagonist with smirking, living totem poles in the dark corners of a pawn shop. These are remnants of braver times, although it is not difficult to parse why these snippets of animation faded toward obscurity as opposed to brighter, less intense Looney Tunes.

But, this is not to say the Puppetoon influence has washed itself from our era. Evidence of their astonishingly invigorated style appears in Coraline or ParaNorman, fright fests with a gander toward their originator. Puppetoon’s use of thin lighting schemes and overactive imagination merely appease a different generation. In their prime, these were novel shorts produced with vintage vigor, much the same as Pixar’s computer rendered ingenuity.

There are, of course, more lively pieces available. Opening with “Philips Cavalcade,” the production follows a multi-national musical routine, with ignited themes and splurged colors. An interpretation of “Sleeping Beauty” likewise sparks to life via its comical take on waking the sleeping interior after centuries of rest. “Tubby the Tuba,” for its somewhat sour mood, remains a resonating piece in this era determined to ransack bullying. Others even spur emotion, with an evocative “Tulips May Grow” stunning with its strong-armed anti-war message and beautiful perseverance.

Others split their end product quality, although not without an outstanding eye for animated bliss. Even when Puppetoon Movie slinks to its lows, it remains generous in its signature style, something to admire against the work of Willis O’Brien, Ray Harryhausen, and David Allen. George Pal’s work will never be copied; it was purely his own. 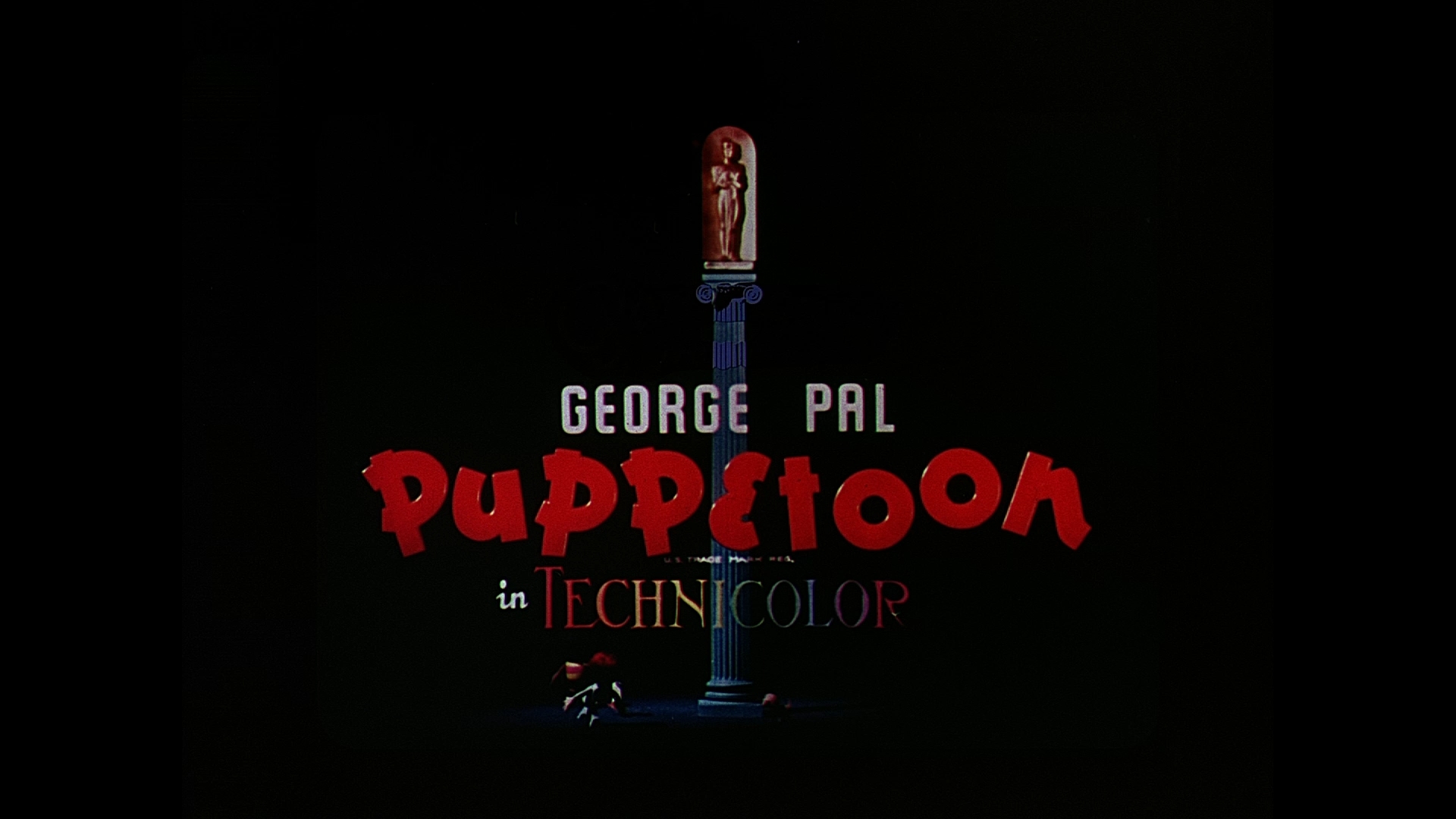 The Puppetoon Movie is an interesting challenge as a 1987 feature culled together from ’30s and ’40s animation – sometimes in Technicolor. This creates multi-generational film and rather surprisingly, consistent visual quality. Opening and closing credits display a tinge of artificial sharpness, although so subtle as to consider it a minor aside.

George Pal’s work struggles with persistent damage in the main feature, riddled with scratches and dirt, even reel markers. These are likely forever part of the print, as is some early gate weave. This does not dissuade detail. A jump in resolution to Blu-ray still captures minutiae on the puppets, from fingerprints on Gumby to paint streaks on the classic era puppets. Miniature sets are a marvel of appreciable fine details and craftsmanship, losing none of their zest in HD.

Arguably the heaviest loss is color. Many of these were filmed in Technicolor, and when transferred for the sake of the movie, the unmistakable zest was left behind. Proof lies in the bonuses where seven additional Puppetoon HD shorts reside outside of an additional transfer. These contain the full breadth of Technicolor beauty and an astonishing glow associated with it, plus even better layers of fidelity. If anything, The Puppetoon Movie meant to broadcast these pieces to a new generation, dimmed of their initial wow factor or not.

Even still, the disc remains difficult to argue against. Grain management on the part of an AVC encode is commendable, freed of any compression errors. Created from what appears to be a modern, high resolution scan, press materials reference a 35mm interpositive source. End results show through, with a careful hand and clear respect for Pal’s work.

Audio choices split between DTS-HD 4.0 or stereo PCM, and most of what is referenced here will be DTS-HD. One error of note occurs twice during “Tubby the Tuba,” where one channel is silenced for a brief second before being kicked back into life. This is either source damage or an encoding fault. Otherwise, the mix is error free.

Puppetoons is loaded with music, blaring and central to the features themselves. Products of their era, peaks are wobbly and beginning to fade, preserved without modern embellishments. Any dialog is strained, a bit foggy if you prefer, but still intelligible with a naturally appealing age.

Musical routines work to fill the soundstage, and in consideration of the era, with an almost futuristic level of bleed to the rears. Natural composition fits into modern home theaters. These themes fare better than any dialog. As for the brief book-ends captured in the late ’80s, they sound new, bringing the voice work of the late Paul Frees through without any concern.

The sheer volume of worthwhile bonuses is remarkable for a feature most have never heard of, and this becomes one of the best collections of stop motion staples ever pulled together. Wirter/director/about everything else Arnold Leibovit joins animation historian Jerry Beck for a lively commentary over the main piece. These are followed by the seven HD Puppetoons (about an hours worth) mentioned above, and they are gorgeous. An additional dozen SD ‘toons are offered, some mirrored by the movie.

The Fantasy Film World of George Pal is split into 22 parts, charting Pal’s film career from these animated shorts to his awe-inspiring sci-fi work, totaling 90 minutes of documentary. A Puppetoon Animator, Bob Baker, is interviewed for 12-minutes in the next bonus, discussing his work and what made the process different from later stop motion. Trailers and a still gallery are left… on disc one.

The second disc houses a second feature, The Great Rupert, a blending of live action and animation (starring Jimmy Durante) decades before Roger Rabbit staked its claim. With an HD make over, Rupert holds up. Seven interview segments follow in various lengths, chatting with Ray Harryhausen, Russ Tamblyn, Roy Disney, and others. A separate interview features Wade Kimball as he chats about his experiences with Pal.

A wonderful, “where did they find this?” bonus comes from a local news station as they visit the set of Destination Moon. Pal and the actors sell the feature for 22-minutes. Another Pal interview concerns his later feature, The Power. Footage from the 1962 premiere of The Brothers Grimm is an enjoyable look back. Finishing the disc off are some home video snippets of Pal from ’30s and ’50s, a puppet demo, and additional trailers/art. Discs also come packed with a short booklet chronicling the history of Pal’s animation work.

Additional screens from the bonus movie, The Great Rupert: