Singing underwater crustaceans join up with a dissident (if infectiously excited) teenage mermaid to signal Disney’s fairy tale renaissance. Composer Alan Menken and lyricist Howard Ashman scored dual Academy Awards for their music, arguably the catchiest and most meaningful of Disney’s suite as Ariel searches for land based life with her true love.

Much can be drawn from Little Mermaid’s excited, often wide-eyed approach to traditionalist Disney mainstays of unlikely romance. Audience sophistication, even for children’s entertainment, demanded more than princes on steeds or oppressed busy bodies as leads. Mermaid brushes up Ariel with a vested interest in the human world, intrigue and curiosity lending her something more than fluttery eyes. It is also fuel for an ironic “fish out of water” story.

Even her love interest Eric has lines, a personality, and a fixation. His bond to Ariel has thematic merit, Eric rescued from a shipwreck and unable to forget Ariel’s voice. It is thin, but a sliver beyond dramatically haggard, “first sight” methods which would push this renewed Disney fixation on fairy tales into the elite.

Little Mermaid is easy to criticize for its pale imagination in storytelling – a love struck female existing only to lust over a square-jawed prince – hitting fantasy cliché branches before being clubbed over the head by the boards they would make. But, Little Mermaid rushes in with complications to a simpleton narrative, and ushers in side characters with whimsy to push away from nauseatingly generic tropes of princess fiction. Romance is bumpy and still heartfelt, intruded on yet still determined.

Little Mermaid even casts a striking villain, corpulent Ursula with commanding voice work from Pat Carroll, seeking to overthrow the sea’s King, Triton. The film came on the cusp of animated celebrity voice work, and while Carroll’s (still active) career spanned into the late ’40s, it does not carry recognizable, distracting qualities. Ursula is abrasive, even crude, and it is a performance which lives as Ursula rather than a Hollywood namesake.

For a generation of ’80s/90s children, Little Mermaid became theirs. Aladdin, Lion King, and Beauty and the Beast too, although Mermaid has a distinct positioning advantage of being first. Some of its weight lies in nostalgic memories, but the film is too exuberant and excited to merely brush off as vintage reflection. In the same way this current generation can be groomed on Toy Story or general Pixar, their parents were under the spell of Ariel. It is an animated fixation worth having. 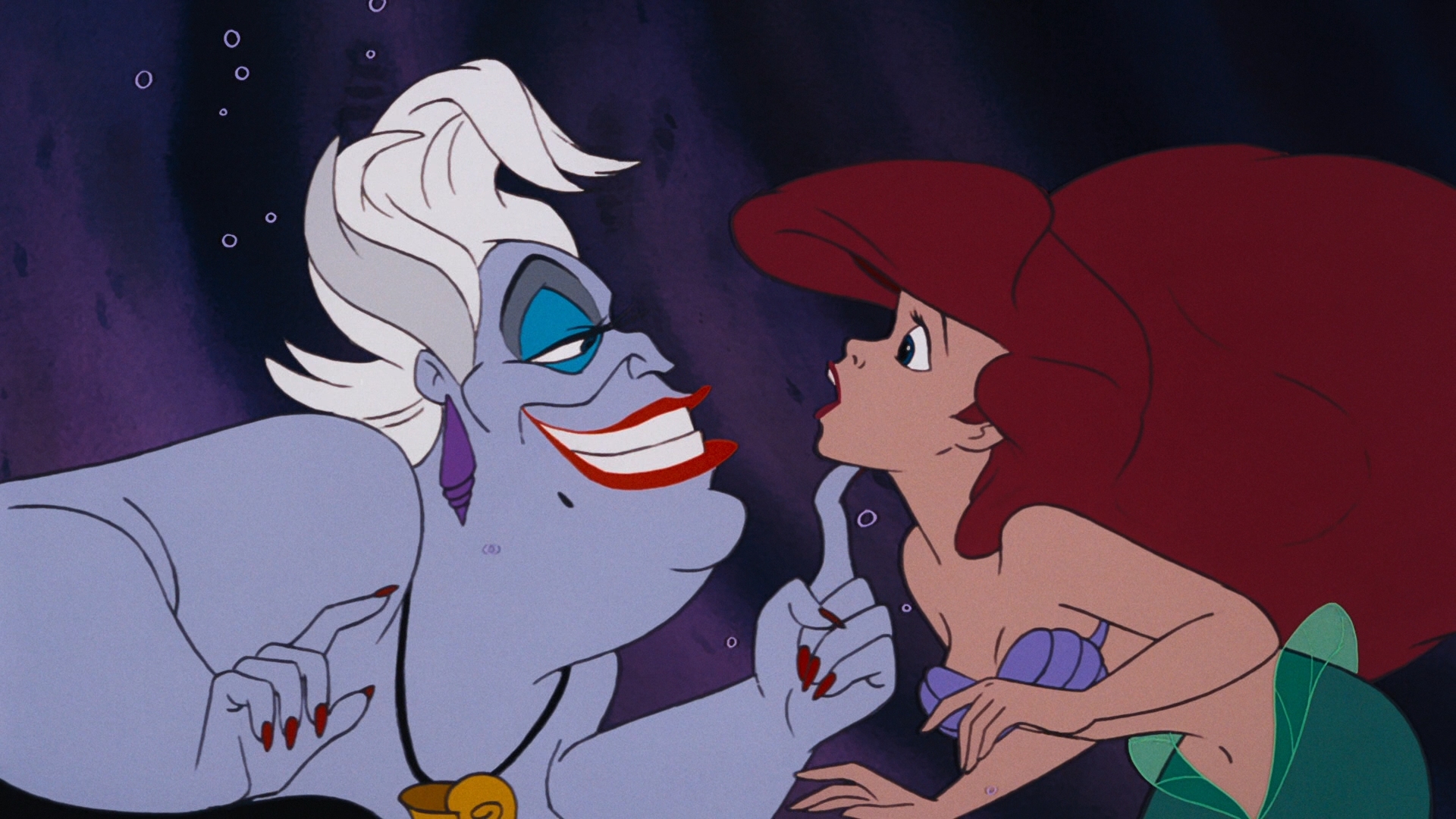 Disney keeps some of the grain (a rarity for the studio) embedded onto this Blu-ray debut for Little Mermaid. Animation carries a slim, sometimes lost veneer of film-based grain, enough to create the illusion of watching something other than direct animation cels. It should be noted in 3D, whether due to dimming glasses or additional processing, film elements are barely noticed.

Natural filmic elements are no challenge for the encode, presenting a film without the tightened sharpness usually conducive to traditional Disney animation. Mermaid carries a softened style, no less pure than previous discs, adding to its magnificent qualities. Artifacts are held and invisible while colors carry dense purity. Underwater, Sebastian’s red and Flounder’s yellow/blue are dazzling. Richness in backdrops is appreciable and then exploding once the film moves to land-based story telling. Primary depth is a marvel.

Resolution proves poky, picking up on textures lost on other home video formats – especially sea floor details – if failing to dazzle with regards to cells themselves. That falls to the cleanliness of the animation itself which avoids any tells such as pencil strokes or brush lines. Thickness of the ink lines is dominating, and as Disney’s final cel animation masterpiece, this feels like total mastery over the process.

Any worries of intrusive noise reduction methods after induced paranoia with Sword in the Stone (Blu-ray review) are laid to rest. Mermaid proved too beloved, and is resurrected in clean, natural HD without broken DNR. Film grain left intact shows dedication to preserving and presenting a flawless source with none of the aggressive, tool-driven tweaking we now have reason to fear.

Disney’s 3D remastering can be docked for its lack of aggression, if not its depth. Little Mermaid feels encapsulated inside an aquarium with viewers peaking in between foreground objects, scenes asking for 3D application. Bubbles (trivia: outsourced bubbles, sent to Chinese animators) are consistently layered to push into ocean depths, and musical numbers fill with schools of fish.

Most impressive is how 3D effects are applied to distinctly 2D characters, adding weight and volume to traditionally flat designs. Arguments over what this does to intent can swirl up into similar colorization debates, but for practical, critical purposes here, the effect is outstanding. Ariel’s hair passes in front of her face, and Sebastian’s claws poke away from his body. Ships and waves fade into backgrounds, and hallways feel immense. However, nothing here breaks that front plane, everything stopped at the device’s glass without simulating pop out. It feels reserved, if entirely natural and unobtrusive.

Little Mermaid cannot be considered vintage given its 1989 release, yet this DTS-HD 7.1 mix is astonishing in its clarity. Dialog is almost distractingly modern, and low-end impact is felt with guttural rumbles which battle current animation in density. Mermaid is nigh indistinguishable from new releases.

Almost certainly pulled from 6-track 70mm presentations, the addition of two surrounds is minimally applied; tracking elements are pure enough in 5.1. There are moments, including ominous creaking of underwater shipwrecks, which are assigned to center surrounds. Music certainly rushes to fill space as well, if copying material sent to the other rears.

Stereo effects whip up a frenzy of movement, rushing ahead with water in motion. In Ariel’s collection room, scale is added by sourcing dialog out from the center, both stereos and surrounds taking a piece of this workload. A few explosions, boomy fireworks, and loud, aggressive final act action are all tremendous in their own way, lifting the film above what some may perceive as timid design by default.

Disney’s Blu-ray release is complete, offering a slew of new bonuses and a suite from DVD. While a Carly Ray Jepsen music video and tour of Disney World’s new animation section (with Ariel voice actress Jodi Benson touring) are superfluous, a retrospective with directors, animators, and others is stylishly put together. This piece, @DisneyAnimation, is quite heartfelt at only 10-minutes.

Under the Scene details the lost art of live action reference, and how the Mermaid crew knew nothing of the process going in. Storyboards – and the directors – tell the story of Harold, who was dropped from the production for time. Howard’s Lecture is a talk given by lyricist Howard Ashman to the crew, certainly interesting. A sing-a-long is self explanatory.

DVD features? There are plenty, including a commentary from co-directors Ron Clements & John Musker joined by composer Alan Menken. Deleted scenes, added music, and a look at an uncompleted ride are also here. Little Mermaid hosts a slate of filling bonuses, and nearly all of it is worth spending time on.