Night of the Living Dead’s asset is disbelief with regards to it paradoxical title. Modern zombie fiction deals with acceptance; the dead live, so move on to splatter brains for audience attracting, exploitative gore. Living Dead never comes to terms with a sauntering, cannibalistic horde, and displays no internal intelligence regarding these events.

News reports are dumbfounded, unable to find “zombie” in their vernacular. Rotting, walking corpses are ghouls, and lines are delivered with stout authenticity. If they believe, viewers must as well.

Propped up with brushes of alien radiation from Venus, undead lurch toward central players, who in panic take defensive postures. Mentally dormant Barbara (Judith O’Dea) sits distraught and aimless for much of Living Dead, coping (poorly) with the rushed abandonment of her boyfriend. Ben’s (Duane Jones) leadership role tackles the rotting exterior conflict while forcibly juggling interior breakdowns with a cellar dwelling family, the Coopers.

Living Dead is proud of its cultural abrasiveness, audaciously casting an African American lead as Civil Rights overloaded political circles in the late ’60s. Jabs at established religion center a film which feels rogue, not only for its shadowy cinematography and “off the cuff” filmmaking ideals, but also its ham hock gore with snippets of casually employed nudity. Undressed black & white photography glazes events with surreal genius.

Director George Romero would spin Living Dead into a lifelong franchise, some of questionable quality, and others superior in effectual morality. Yet, 1968’s icon never sways from relevancy, simple and shocking in ways repeated by other low budget enigmas, if increasingly brazen based on cultural approval.

Zombie films, now rendered by a glut of pop culture influences, have superseded Romero’s formula. Our make up is better, scale is often worldwide, and modern ghouls shrug off rigor mortis in exchange for marathon sprints. Living Dead was not even a mastermind, Universal’s White Zombie typically laid forth as a genre originator. Low budget cheapies, such as 1955’s Creature with the Atom Brain even utilized survivalist framing devices.

And yet, Living Dead became a pioneer. Maladjustment to sliding scales of cinematic rawness may have shocked late ’60s viewer ship, but that impudent approach solidified Romero’s legacy and Living Dead’s historical placement. You can scare and you can shock – anyone can – but to elicit fear is the talent. Living Dead’s frightening sense of reality elevates the low budget progenitor of zombie fiction. 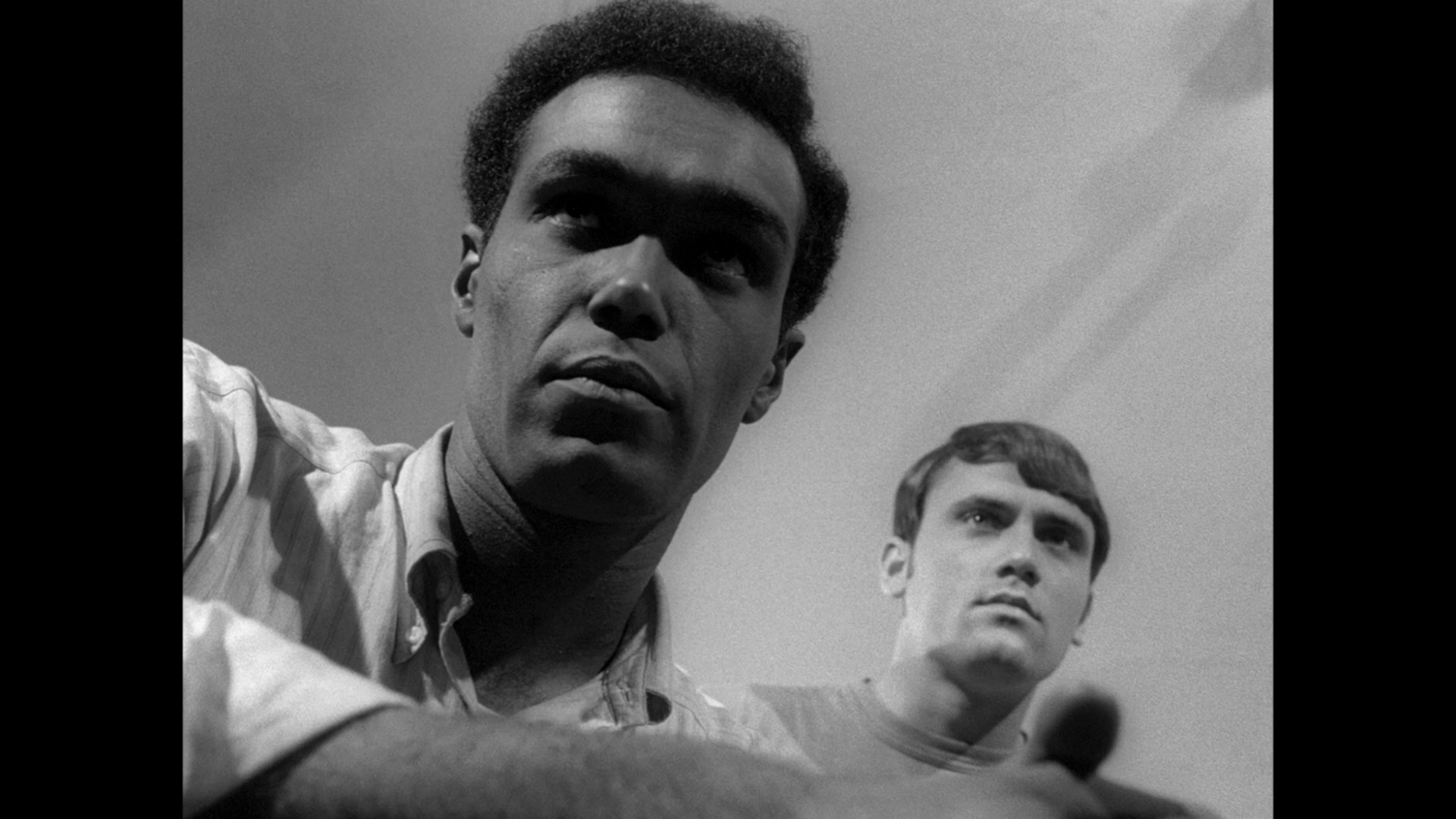 Night of the Living Dead’s long standing status as a public domain giant found prints of dubious quality reaching the market for decades. Multi-generational, even near destroyed releases flooded home video, which rightfully brings into question any Blu-ray edition… and then Happinet’s Japanese disc became available.

In a stylish, transparent black case, this unassuming box art houses a startlingly clear AVC encode. Opening images of tall grass and trees lining a roadway are meticulously defined. Compression attacks grain to maintain an even layer, and bolts down spikes as keep them filmic. Living Dead has concerns, although none can be levied against this monstrous, consistently 35Mbps+ encode.

Gray scale carries balance from super whites to fantastic blacks, casting dominating shadows onto cast members and blooming where needed to host sunlight. Gradients are pure without intrusion from posterization. Eerie glows often accompany wide shots of stumbling zombies, a reflection of front lighting which only adds to their unsettling mystique, with the help of potential brightening.

Trouble ensues with regards to cropping, all four sides clipped enough as to cram close-ups into framing. Familiarity with Living Dead makes the choice grating, and if not, cinematography will feel strangling tight. That aside, print quality is exceptional, with grazing scrapes and scratches of minimal detriment to the overall presentation. Clean-up was precise.

Living Dead is in a persistent battle of focus, softening and sharpening naturally in camera, which can have an erratic effect on grain quality. Happinet’s efforts, brought up from Dimension’s Extreme line via a 2008 40th Anniversary DVD release, does carry mild signs of filtering. Evidence is only apparent in specific medium shots, and has only a glancing impact on image fidelity. This is otherwise outstanding.

PCM 2.0 mono will deliver this all-stock score with fidelity range in highs and lows. Drums originally meant for Teenagers in Outer Space gurgle slightly, and unnerving highs feel lopped off before their full peak, yet the restoration never feels robbed of purity.

Dialog is undoubtedly vintage in origin, if pleasingly crisp. Certain exchanges were recorded cheaply on set, adding in murky echoes, if a logical airiness. Instances of hissing or popping have been rendered extinct.

One for the Fire brings back cast members to retrace their steps in a feature length documentary. While padded out with film footage, this 83-minute retrospective pulls together surviving actors, and even revisits locations.

An audio interview with deceased star Duane Jones from 1987 is presented, one of the few (if only) detailed talks he ever gave on the experience. Happinet includes a rough condition trailer to conclude the disc.