Bumbling, bearded magician Merlin takes a young runt under his wing in this pre-King Arthur Disney tale, Sword in the Stone. The sword, planted by an unseen entity, becomes a background device as Merlin shuffles along scrawny, nasally Arthur – nicknamed Wart – on colorfully perilous misadventures.

Disney spruces medieval England with splashes of color and deep line work, a stand out of the studio’s 1960s output. Breaking into an often weary story structure, Merlin’s forgetful guided hand whips Arthur into animal forms to spawn rambunctious, playfully designed sequences of mischief. Arthur’s brutish and adoptive father treats his young one with authoritative gestures, turning the character into an obedient serf.

Merlin’s inadvertent entanglement is meant to brush aside the boy’s tepid shyness, breaking his sheepish shell while pushing relevant messages of acceptance under whimsical animation. Sword in the Stone never settles, blossoming into a flurry of transformations no less technically daunting on pencil & paper than modernized computer routines. Screechy Madam Mim, practitioner of dark magic, clashes with Merlin in wild animal rumbling. Superfluous as the series of jaunty battles may be, they effortlessly pull in younger audiences with their dashes of saturation.

Sword is built on whimsy, a cavalcade of small time gags mixed with running antics involving a starving wolf. If sequences feel idle, a crack or side element step onto Sword’s frame. Running a meager 79-minutes, this is exhaustive animation packed into compact storytelling. Much derives from merely rampaging about without being hunkered down in traditionally minded structure. There is purpose to settling down into three act placement, just not here.

Blending moments of broad joy and menace, Arthur’s harmless escapades are often taken – harshly – into lines of legitimized danger. As a fish, instincts are induced while a ravenous barracuda finds prey in these clumsily unfamiliar creatures. Romping as a squirrel? Flirtatious spring romance, a most dangerous quest indeed.

Sword is blissful in motion, a series of events ultimately hollowed and thrust into the title scenario on accident. Seemingly out of nowhere, Arthur is sprung from his childhood onto a throne of adult responsibilities. Fighting as he may, Arthur’s place was destined. Sword in the Stone rises above sprightly parables instantaneously, a transition we’re all familiar with as elements of work, accountability, and obligation push, even force, juvenile energy into our past. It’s still a worthwhile ride. 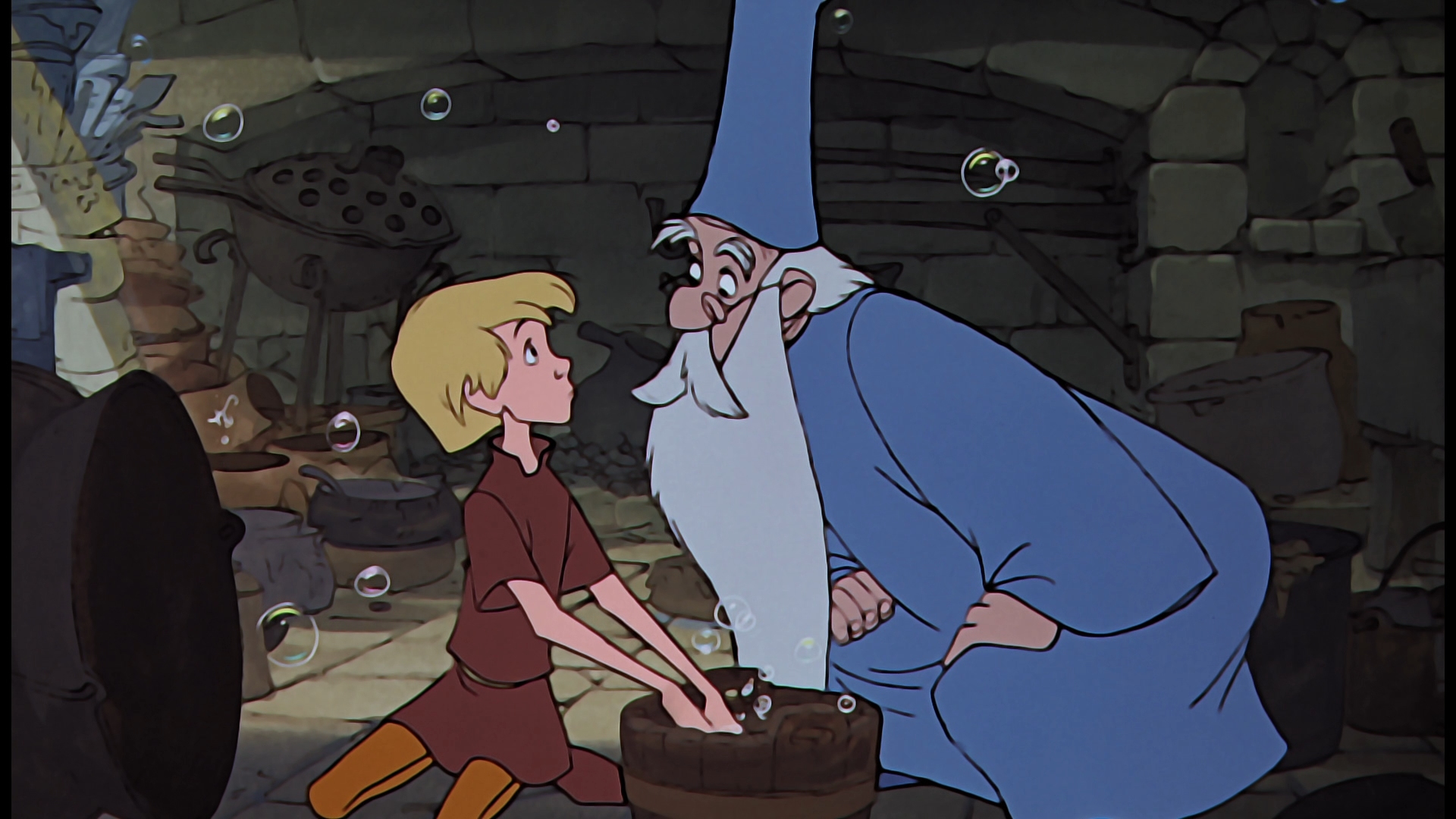 Disney’s form of HD animated presentations involves washing prints with digital tools to capture pure, unobstructed animation cells. To date, Disney’s reputation has remain unscathed (if not without controversy), even if their methodology has been weakly exposed, Lady and the Tramp’s Blu-ray filtering source grain with hints of recklessness. Their B-efforts, say Emperor’s New Groove, can run into walls of compression.

But Sword in the Stone? This is inexcusable. Disney, as a whole, has run into quality hiccups before; few will forget the monstrosity of Gangs of New York in its initial print run. It was eventually re-issued and fixed, which is exactly what needs to occur with Sword in the Stone. Appreciation for animation cells has been tossed aside for this mushy, filtered mess which ill-defines lines, roughens up crowds, and smears color blending in an egregious helping of splattered digital tinkering.

Sword’s animation style remains a gem, thick on lines and preserving sketch marks for uniquely open technique. Often, you can barely tell despite premiere AVC encoding. Compression will be held at bay, but crushing effects were completed prior to authoring. Mastering may boast resolution, yet it is worthless as applied to such bloated sights.

Unsightly ringing surrounds line work in almost every shot, inexorable as it impedes on deep, thick coloring. In close, some of these elements may appear natural, while backgrounds hold a decidedly key loss of fidelity. That remains inescapable. Further proof of carelessness can be spotted during squirrel escapades, a few shots appearing to carry remnants of grain half removed.

Comparing Sword in the Stone to perennial Blu-ray whipping boy Gulliver’s Travels would be hyperbole, if not without merit. Those same tools which smeared every ounce of 1939’s rotoscoped classic are in play here, although set to 50% instead of outright suicide mode. Disney’s only remedy is a remaster/reissue, brought up to their lofty standards, done with consumers in mind.

Vocalized introduction brings this DTS-HD 5.1 mix to boisterous life with immediacy, displaying beautiful fidelity and clarity. Sword employs numerous and inconsistent echoes to its dialogue, often shifty in quality with garbled effects near the peak. Differences between music and story chatter are immense, if seemingly detached from this uncompressed surround update.

Mild swells into surround channels and stereos are light on exploiting modern speaker set ups. Loading fronts is enough, with little daring to progress into the surrounds unless absolutely called for. Such limited spread leaves a call for optional mono purity.

Sword in the Stone packs an alternate opening and featurette on music writers The Sherman Brothers in its initial rung of bonuses. Following are two medieval shorts, one with Mickey Mouse, the other featuring Goofy. A chance to sing along with the feature’s clever tunes is included for finality.