A documentary feel will shield this Microsoft promotional film from any easy criticism. Well, that and it’s pure fanboy glee. Forward Unto Dawn will follow a series of UNSC cadets as they train, unaware of who their real enemy is until the Covenant forces step down onto their planet.

Outsiders of Halo fiction will be lost. They’ll wonder why a seven foot robot man can so easily take down enemy snipers with only a pistol. They’ll be confused why USNC vehicles need trained soldiers to drive them. They won’t have a clue what a Covenant is, where this is taking place, or why they should care.

Fans will simply smile, soak it up, and wonder how it’s taken so long for Halo to reach this live action zenith.

With a rich, engrossing backstory, this franchise deserves blockbuster treatment. At a paltry $10 million and mostly made as an excuse to promote video game Halo 4, this becomes more of a taste. That’s fine, because Forward Unto Dawn is the best non-video game slice of this series to date.

We’ve seen Halo on Blu-ray before. Glimpses of its potential as a feature length film were evident in Halo Legends. Just glimpses, mind you. Forward is the real deal as series protagonist Master Chief fearlessly dives into combat with his best assault rifle pointed into the thick of enemy cover. He jams machine guns into Covenant faces, headshots with a precision pistol, and pops Hunter noobs with grenades. It’s so Halo.

Even pre-Chief (and somewhat annoyingly, Chief is NOT voiced by usual actor Steve Downes), Forward is stressful look at combat school within this universe. Thomas Lasky (Tom Green – but not THAT Tom Green) is centered in the narrative, working through health concerns and personal loss. Camaraderie and headstrong soldiers clash at Capture the Flag training sessions, and done in a way that still elicits the feeling of Halo.

There’s also deception and ill advised decisions on the part of higher ups. They’re hiding something, and that’s the existence of an alien race. Twenty or so years prior to Halo 4, Lasky is oblivious to the real threat, believing he is in service to fight an insurrection. The eventual truth is brutal, hard, and violent.

Forward Unto Dawn is impressive not only because of how it turned out, but because of what it is. This is, in reality, a feature length advertisement. It never comes across as such during viewing. Sound effects and music cues are inherent to the series; it wouldn’t be the same without them. This is corporate control of a franchise without Hollywood interference, and maybe a new era of media advertising. If they turn out like this, that’s fine. 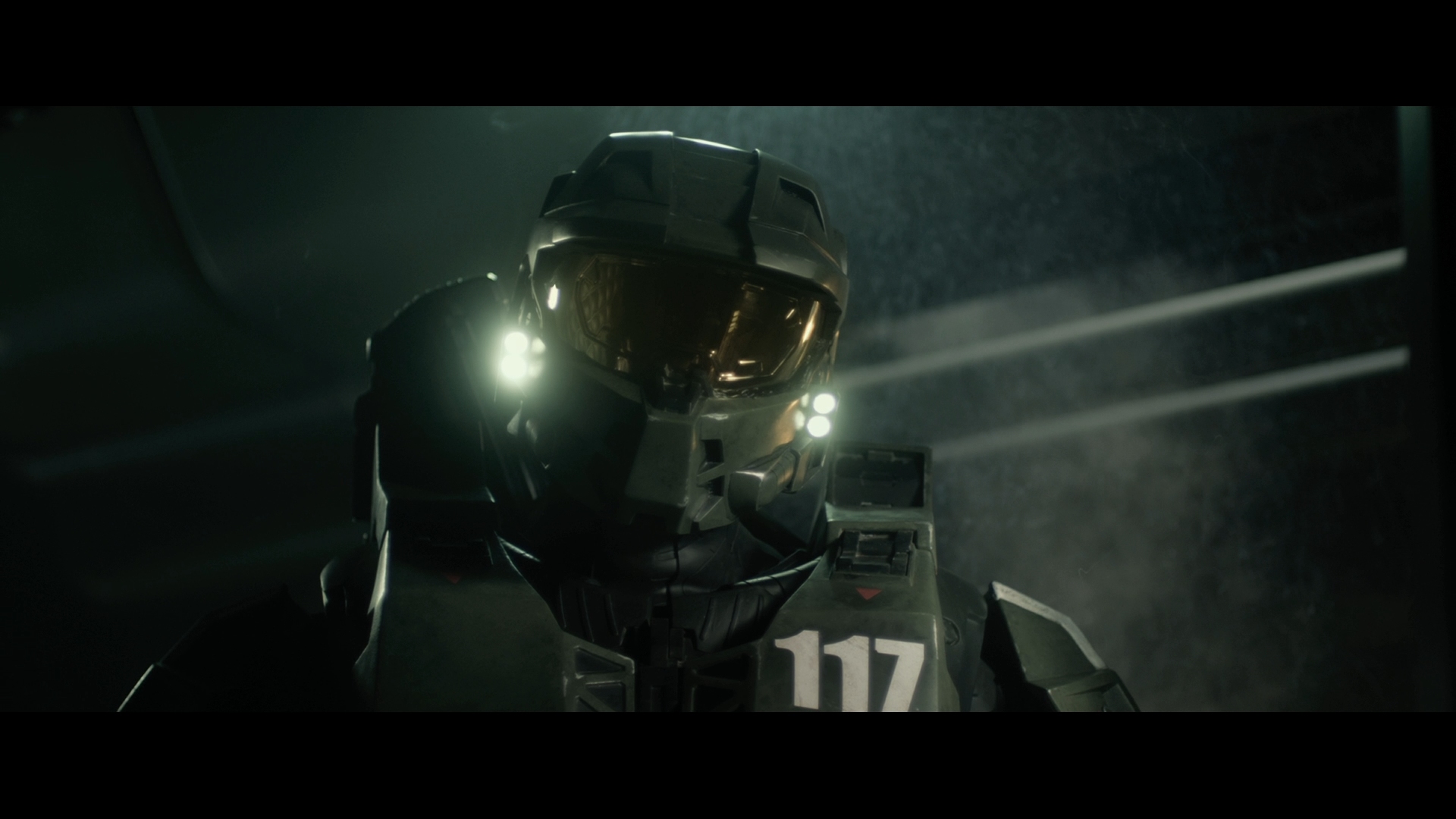 Shot digitally with an occasionally gritty feel, Forward Until Dawn looks better than it should too. Rising expectations are only going to deter future attempts at material like this. Anything less will now seem unacceptable. Here we have the Red Epic employed with superior end results, capturing a wide swatch of definition in close, while matching that with clean exteriors. Plentiful slow motion allows for the texture to be soaked up and appreciated.

Minor noise intrusion is far less than this often dark photography could fall victim too, the real battle being banding. As Chief steps into the frame, his headlamps create an immediate compression effect, and the battle that follows for a solid half hour is littered with streaks. It is disconcerting for something this resolved elsewhere.

There is little to the color palette, awash with yellows, oranges, and the occasional brown. Night may bring with it some chillier hues, but the saturation is held until Covenant forces pull out their trademark glowing weaponry. Seeing their veritable palette splash across the screen is outstanding, highlighting the action with bursts of primaries. Backed by dense black levels that hold firm to a consistent depth, it’s all the more striking.

Necessary first-person elements show a helmet view with slightly exaggerated features, and Lasky will often pull up video that is falsely interlaced. The effect is fine, with no harm. This AVC encode – ironically on a Blu-ray from the format-spiting Microsoft themselves – is a winner. Shame about the banding though.

Boomtastic. That’s trademarked as of right now for future use, and the term will always relate to Forward Unto Dawn. Assault rifles dominate in terms of gunfire, with a genuine boomtastic punch. See, it fits.

That doesn’t even begin to cover the sheer enormity of a tower collapse that rumbles more than a single room. It’s a house shaker. Grenades and plasma cannons jet into the ground with tremendous LFE force. Steps from both Covenant and Master Chief add scale and heft to dominating characters. It feels expensive.

Don’t count out even the quieter moments. Training sessions within the forest are alive with birds and wildlife that fill the available space within the DTS-HD 5.1 mix. Training is no joke either, with whipping rounds fired into each channel, and the score bellowing around to the rears after hitting the fronts with force. Some fidelity issues with dialogue, adding a scratchy quality to certain lines early, will clear up as the film progresses.

Two commentaries will bring to light the production, the first a solo outing with director Stewart Hendler, the second with Halo franchise faces Frank O’Connor and Kevin Grace. Thirteen pre-release vignettes act as extended scenes in some cases, and are worth a glance. A recruitment video for the troops is probably worth skipping over despite being only two minutes.

An hour long look behind-the-scenes is often generic in style, but deep enough to offer a glimpse into the production in addition to the franchise. It’s ten parts total. A live action Red vs Blue skit has a number of laughs, and the feature itself carries an isolated score if you so choose. Some trailers and various stills, drawings, and computer models sign off the bonus features.

Note that oddly enough, if you select the “play all” option on any of these extras, you cannot exit to the main menu, or pull the pop-up. You’ll need to chapter skip to the end if you’re done early. Maybe Microsoft doesn’t quite have this Blu-ray thing down yet.