Women are evil. No seriously, they’re controlling, conniving beings who send males into the junkyard to live out their lives because they’re not considered worthy of surface dwelling. Don’t get angry female readers. This is what Moms Needs Mars is teaching kids.

Young, impressionable minds won’t learn to love their moms, just be horrified that if they misbehave, some creepy semi-human alien will send them into a pit of dust to live out the rest of their days. It’s like the ultimate feminist movie, where woman woman rule an entire planet, and men act like savages. Then again, some may think Mars had it right all along…

Anyway, Mars Needs Moms will undoubtedly go down as one of Disney’s greatest debacles, a technologically expensive piece of animated schlock that never finds a groove. It can’t really, the adapted script from Simon and Wendy Wells filled with nauseatingly annoying characters, a creepy alien/human romance, and a cackling villain who would have been tossed off the set of Mars Attacks.

The Martians have concocted a convoluted nightmare of a civilization, one where kids are raised by disposable nanny bots. Somehow these kids manage to turn into well-adjusted adults, enough to take a desk job. Every so often though, the robots needs an AI boost, the Martians snatching a disciplinarian mother from Earth to use as an example. In this case, a kid joins the fray, heading up to the Red Planet to save his mother in one of the most non-endearing, non-heartwarming tales ever told. Song of the South had more heart, and we all know how that turned out.

Disney tried to salvage the outrageous budget by milking the 3D qualities, Mars gunning for a Guinness record for most falls. It’s rightfully established that gravity on Mars isn’t what it is on Earth, but these characters take miles deep tumbles into the bowels of the planet, (all shot from a perspective meant to intensify the dimensionality) and all come away unscathed. All it does is let the viewer question why Annoying Characters A, B, and C survived long enough to see this one through to the end.

It’s never funny either, playing out a, “My Mom!” gag with the brain dead males until it implodes on itself, and a hippie alien who checked out some classy American ’70s sitcom is just dreadful. She’s not enthusiastic, she simply seems hopped up on something, the same something the audience will need to see this one through to the end. 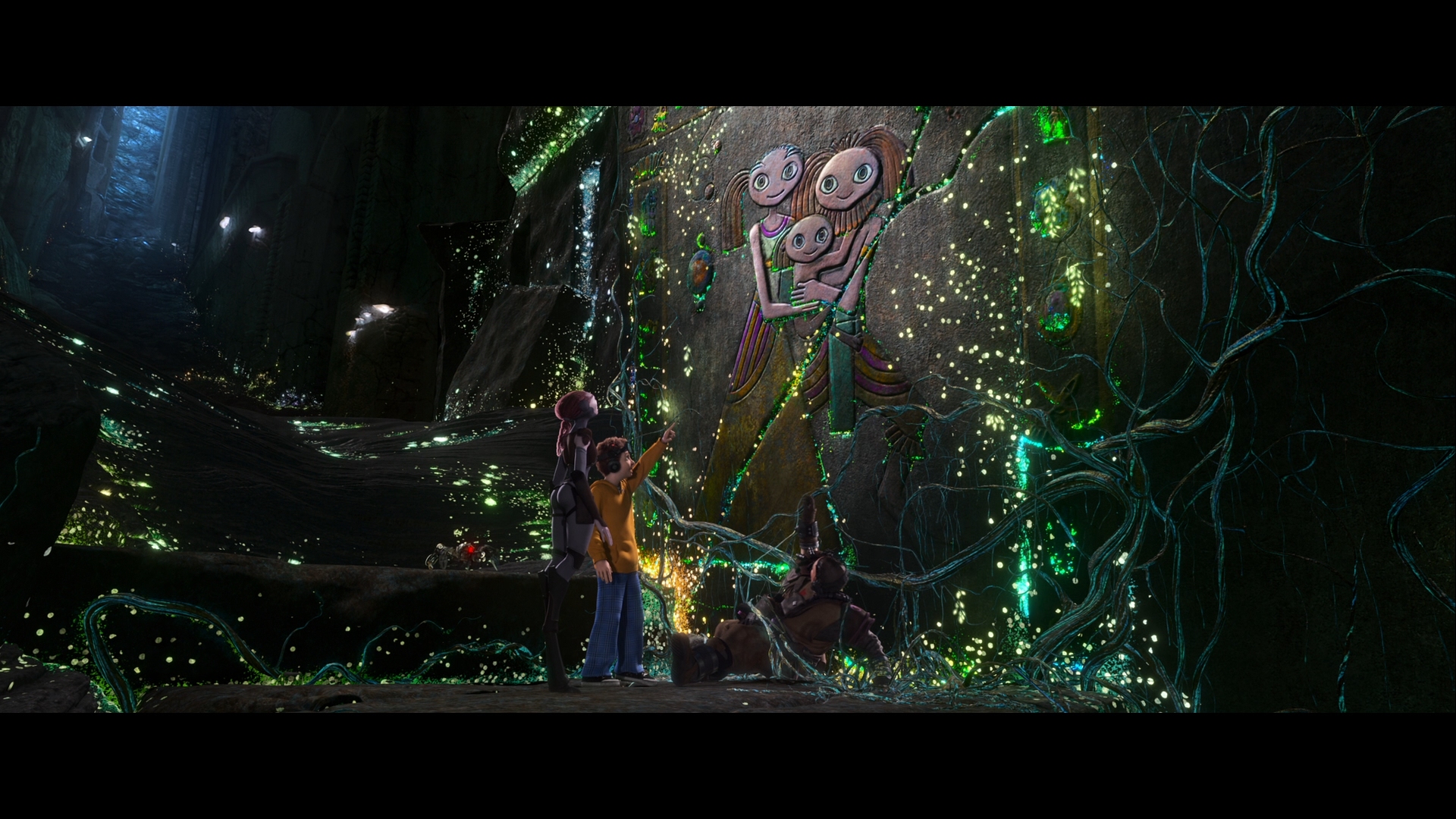 Mars Needs Moms is not perfect on Blu-ray, although “perfect” is relative to the Disney animated feature grading curve. Fine lines on alien uniforms, spaceships, or some clothing will reveal the slightest bit of aliasing, enough to cause a minor shimmer in certain parts of the image. The Mars skyline will also reveal the tiniest bit of banding, more applicable a complaint in the third act when, well, they end up on the surface.

The rest lives up the expectation, although maybe not the brightly saturated glory of other pieces. Woman have turned Mars into a sterile, cold place (see, they CAN be blamed for anything), filled with steely blues and grays. They have an intensity though, and underground in the garbage dump, fiery reds and oranges appeal to the senses. Come the finale, Ki (Elisabeth Harnois) begins spray painting the walls with brilliant shades of greens, yellows, reds, blues, and more. They sparkle and glisten with a grand intensity, giving life to a film that barely has any.

Black levels prove to be a resounding success, the level of dimensionality on display hardly a surprise. Working in tandem with a pleasing, vivid contrast, Mars Needs Moms is never without depth, making the advent of this newfangled 3D seem even more worthless than it has been to date.

Carrying a full bodied sharpness, detail soars, the skin texture and clothing superlative in their definition. The junkyard is littered with random stuff, the wide pans of the environment gleaming with individualized objects like Spacely Sprockets and Cogswell Cogs (seriously… maybe). The surface itself is characterized by rocks and stray fragments, all perfectly resolved without any interference from this AVC encode. A definite winner.

Disney seems to be fully aboard the 7.1 train, treating those patient enough to withstand the movie with a glorious, involving surround mix that never misses a beat. Little bits of perfectly placed voice tracking dazzle before anything significant even happens, alien chatter and Earth-based arguing swirling about the soundfield. It never loses this quality, but instead embraces the opportunity.

About 10-minutes in, Mars takes on new life, the alien ship that no one else seems to notice besides the kid, lifts off our home planet with a boisterous, aggressive low-end. The sub shakes, rattles, and hopefully doesn’t roll (that would be bad) as lift-off commences, a brutally heavy shock that is totally convincing as far as engines go.

Battles on this Martian planet involve plenty of lasers, the sound effects taking charge as the shred the additional two channels afforded to them. Extended and ridiculous falls at least sound gnarly, wind whipping by and objects passing with precision motion that is far more realistic than this animation.

All of this is balanced with a forgettable yet powerful score, sweeping around to the rears after a focused frontal assault. Dialogue will continue to situate itself where it needs to in order to keep positional focus no matter the conditions. They rarely come better than this.

Extras, at least as far as the bonus menu is concerned, are almost entirely fluff. Fun with Seth details the behind-the-scenes hijinks of star Seth Green, a whole two-and-a-half minutes worth. Martian 101 is barely any longer, discussing the conception of the language used by the natives. Seven deleted scenes include intros from director Simon Wells (the great grandson of H.G. Wells), and are of course in various stages of completion. There are seven in all, totaling near a half hour.

The one worth taking notice of is a commentary/picture-in-picture combo called Life on Mars. This plays the entire movie as viewed on the motion capture set. Seth Green, Simon Wells, and Dan Fogler offer their thoughts over the footage. It’s not all that technical, more breezy chat than anything, although still immensely enjoyable.