There are a lot of spectacularly stupid things in Alien 2: On Earth, things so dumbfounding they’re hard to comprehend. For instance, a crew of speleologists have entered into a cave system, and one of their partner’s heads has just been taken clean off by the creature in front of everyone. Instead of asking what might have caused this, things instantly turn into panic, somewhat understandable, but no one wonders why this just happened? Wouldn’t there be a little curiosity? The conversation that follows deals entirely with trying to find a way out. Great scientists you are.

Never fear though, because that is Alien 2’s slightest problem. A space probe crash lands into the ocean, the cause for this rarely seen critter, and somehow the eggs (or the space rock… things) carrying it end up in a small desert town. Odd. You then have to wonder why Thelma (Belinda Joyce) takes the rock into the cave with her in the first place. Shouldn’t that space be used to collect new rocks?

The film opens on some disjointed stock footage that is about an incomprehensible as film comes, and once into the actual film, a TV producer has the gall to complain about someone inserting stock footage into their programming. You can’t make this stuff up.

Alien 2 is atrociously slow, Italian director Ciro Ippolito using all the time in the world to do everything but show off some budget-sapping special effects. Characters remain mostly nameless and indistinguishable, the time not well spent developing any sort of depth or identity short of a bet on a bowling game.

To be fair, there are far worse foreign knock-offs, hilarious clunkers like Turkish Star Wars bested only in sheer awfulness by our own Star Wars Holiday Special. The number of killer shark films from this same era might set some kind of record on their own without even trying.

There are eventual signs of life in Alien 2, the overdone gore effects wonderfully gooey complete with what appears to red paint pouring onto someone’s helmet. The alien bursts out of a woman’s eyeball, cuts off the above-mentioned head, for some reason possesses a guy only to explode his face, and apparently munches all of San Diego. The ending is almost effective, the idea that this species has taken over the planet while everyone was underground at least intriguing, at least until some cars are clearly seen in the flow of traffic outside the bowling alley. Maybe they’re refugees… or it’s a sure sign of a careless knock-off. 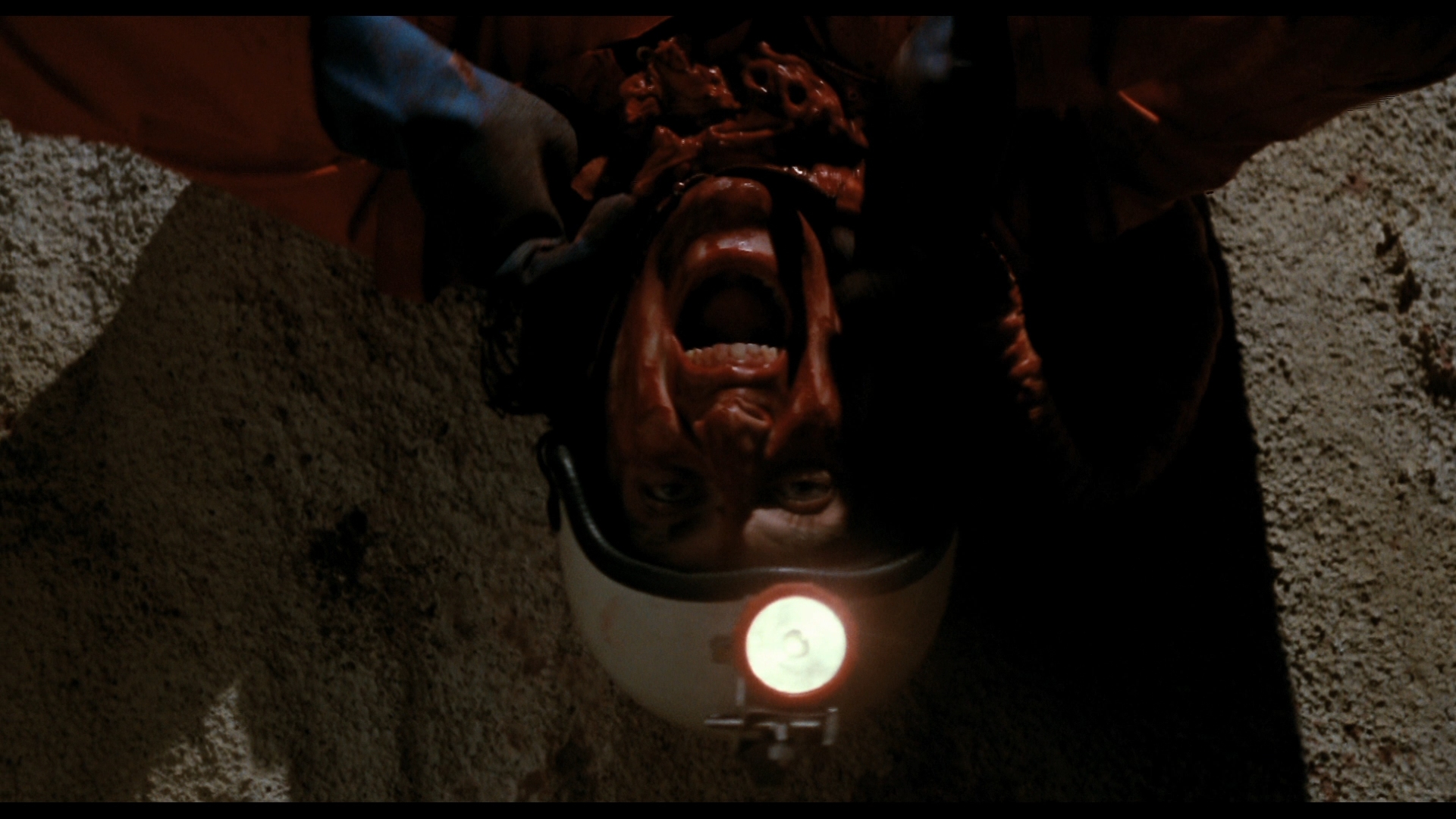 Alien 2 amazingly comes to Blu-ray and in a clean, generally defined AVC encode, more than anyone would believe the film deserves. Aside from the stock footage that dominates the early portion of the film, not only taken from an already poor source but probably 8mm stock at its best, Alien 2’s immediate clarity is a drastic improvement as soon as the actual footage cuts in.

This is not a razor sharp presentation, but one that is naturally soft and left intact as such. Grain is limited, left alone for this AVC encode to deal with and it does so without fault. There are no apparent artifacting issues (with the exception of the final shot, seemingly a lower quality stock), impressive considering the rapid swinging of the camera and fast action itself. When still, close-ups can deliver an appreciable level of texture, high-fidelity detail actually present with some regularity into the cave. The bright headlights focus squarely on everyone’s face, and the result means that texture is now visible thanks to the efforts of Midnight Legacy. A sequence of close-ups around 36:58 are excellent. Others can be marred purely by the wildly inconsistent focus. Rock textures are fully resolved on numerous occasions.

Colors remain natural throughout, the bright red and yellow suits worn by the crew as they enter the caverns system standing out. Flesh tones are fine, and the rock formations inside the cave carry a distinct orange tint. Black levels are outstanding, any complaints of crush misguided with the sternly focused lighting used once underground. There are no instances of murkiness or diluted depth to be had. In the early going, the bright contrast completes the necessary ingredients for an eye-catching image, and the same goes for the end of the film. Damage left on the source print is minor at its worst.

There are two issues of note worth mentioning. The first is some random interlacing within the image, spotted twice. The first happens as some seagulls are flying away at 12:13, and the second happens during the money hand-off at the bowling alley at 15:47. It’s confined to a small part of the image, and lasts for about two frames. It’s easy to miss. The second are some of the shots of the beach after the little girl runs off. Certain aspects of the video appear smooth, almost watercolor-like, the sand in particular. It’s an odd effect, one that happens in other parts of the film as well when outdoors. It’s not consistent, and there don’t seem to be any signs of foul play at work, especially when considering the amount of work that obviously went into this in the first place.

Midnight Legacy keeps the audio in its purest form with a DTS-HD 2.0 mono mix. Surprisingly, clarity is exceptional, the dub certainly obvious but generally free of any major distortion. There are a few lines just before an edit at 17:58 that carry a rather noticeable hiss under them, the issue disappearing when the movie pushes ahead into the next scene.

There is a fairly consistent level of popping on the track, not enough to be much of a distraction. If anything, it shows the source has been tinkered with as minimally as possible. All of the music, including the repetitious six-note electronic theme, sounds fine despite the lack of range. Fidelity is surprising here all around, and while maybe not quite as impressive as the video, it’s still a small feat that it sounds this good.

There are two extras here, including the gloriously over-the-top Dutch VHS trailer. The second is 11-minutes of silent special effect outtakes, including various alternate cuts. The latter is in HD, and in surprising shape. Note there are no subtitles anywhere on the disc, and the original credits go untranslated.

For further reading, you can read our three-part interview with Midnight Legacy’s Dolph Chiarino where he discusses the restoration, Blu-ray itself, and the issues brought up within the review.

Full disclosure: This Blu-ray was provided to us for review on a check disc confirmed to be the final transfer. This has not affected the editorial process. For more information on how we handle review material, please visit our about us page to learn more.