Making miniatures believable is tricky, but leave it to this revitalized Gamera series to find the way to make it work. In this sequel, released a year after Guardian of the Universe, Gamera is brawling with a massive alien creature near an airport where an evacuation is taking place.

The monsters are routinely placed near the actors, the miniature sets blending with the live action perfectly, and quick edits make a miniature helicopter invisible as opposed to the real one. Even better, returning character Asagi (Ayako Fujitani) looks out of a window, the monster fight reflected on the glass. It’s truly an impressive piece of editing and effects work, the seams never revealed and the scale of it all totally believable.

That’s important, because aside from a subway assault by a group of small, insect-like creatures known as Legion, Assault of the Legion (or Advent of Legion) is rather dull. This is the weakest of the three films, mostly due to loose plot threads and the lack of a decent kick-start. It’s a half-hour until anything Gamera related happens, and the Legion attacks simply are not that impressive, at one point relying on some surprisingly graphic gore, a rarity for this genre.

There are a lot of ideas in this sequel, the worst being the out of left field epilogue, a single scene that tries to make this into an environmental parable. An army general seems to have a disdain for Gamera, why is anyone’s guess since he obviously saved the country in the first film. The psychic link between the massive terrapin and Asagi is unnecessarily altered too. In the first, she was cut where Gamera was. Here, Gamera is impaled, yet nothing happens to Asagi, no explanation given.

Legion is still a solid piece of giant monster filmmaking, just lacking the intensity, pacing, and plot development of the others. It is not unlike the middle child, a bit ignored while the others move onto to better things. Ko Atani’s score is also lackluster, a mish-mash of styles, few of them with impact.

It could take pages to wade through this film’s problems, from a reliance on military stock footage, unoriginal shots of explosions while the monsters stand in front of them, and an ending that literally comes from nowhere, with no explanation or audience understanding. That said, Legion is a worthy enough foe that is does generate some danger, eventually utilizing a deadly but beautiful whip-like laser that shreds the city and Gamera. The mini-Legion, focused on consuming energy, also take to Gamera in an impressive sequence of destruction, although it begins with a painful CG Gamera that barely matches the suit, let alone the background.

It is all a jumble, never sure of where it is going or what it is going to do, but it tries its damnedest to entertain. Looking at the mass of the Legion suit, with its mechanical arms and legs, makes you realize it is as awesome as kaiju come. Compared to Gamera, he’s a giant, and that is saying something. Technically proficient, but Kazunori Ito’s script is far too lax to forgive. 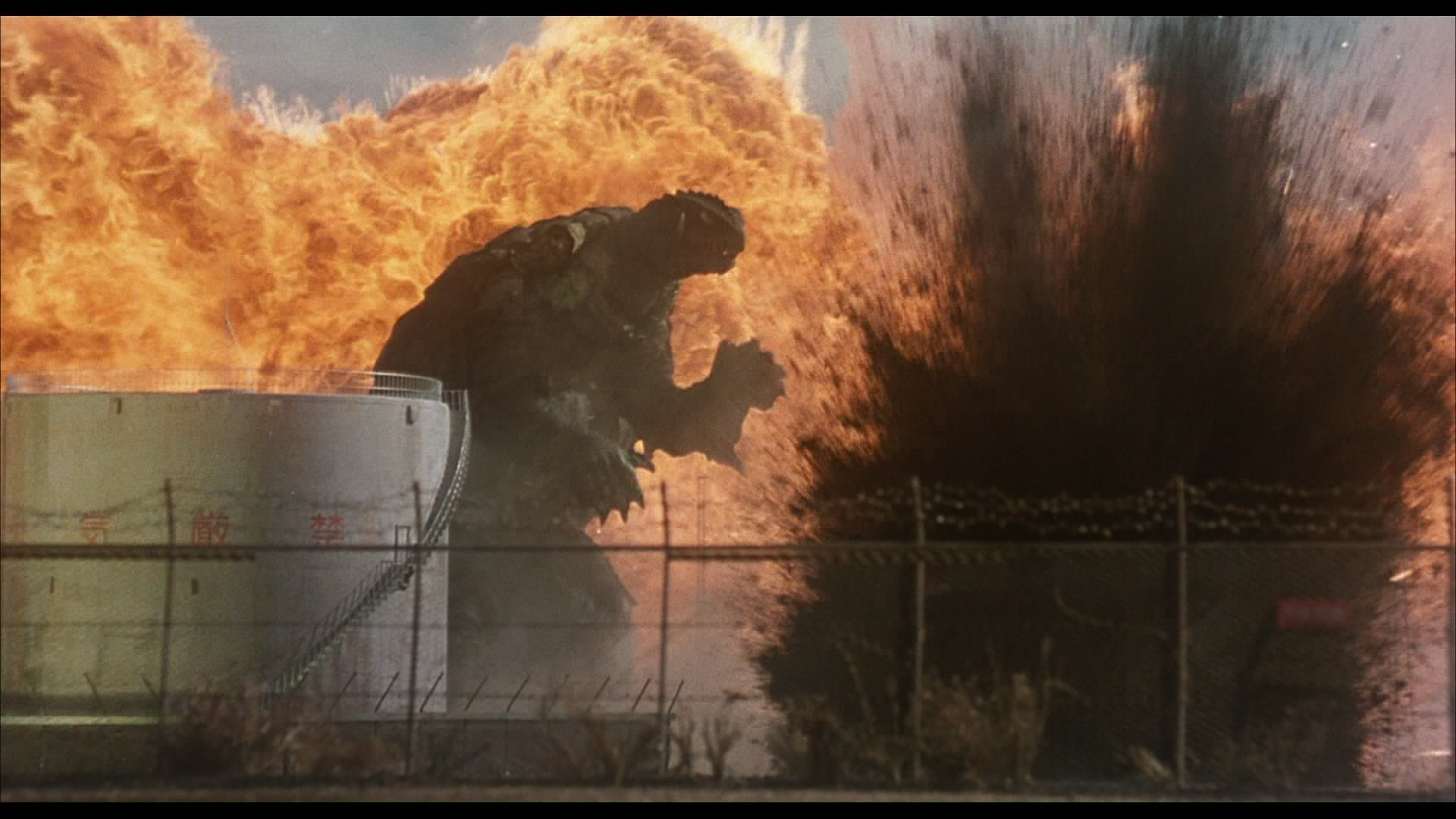 Like Guardian of the Universe, Legion suffers from the same compression problems. Saddled onto a BD-25, the end result is a non-stop assault of artifacting and noticeable smearing in close-ups. The grain is just poorly resolved. A better encode would solve this problem in an instant. Black levels are again lackluster, the film opening on a nighttime field trip and the grayish darker areas stand out more than they should. They never reach the depths they need too.

Oddly, Legion looks a hair sharper, evident on some of the exteriors as the military marches into battle from the various cities. Buildings appear slightly crisper, as do the vehicles. The benefit? Not much. Facial detail is actually weaker, producing minimal definition in close-ups. The kaiju suits are generally covered in smoke or fog, making their close-ups lackluster by design. No encode can bring out much in this regard.

Colors retain a natural look, save for one shot of Asagi and her friend at a ski lodge at 41:34 where their clothes suddenly come alive with vibrant hues. It’s a shame it happens in only one shot. The contrast is under control, save for a sequence right at the hour mark as Gamera marches towards a Legion infected building. The city boasts a hot contrast which is certainly intentional considering the subdued nature elsewhere. It does suit the upcoming events.

With the added resolution of Blu-ray, the stock footage sticks out at home worse than ever, the opening frames casting some doubts on some viewers as to where this is going. The military footage, typically tinted a dark blue in an attempt to disguise it, is riddled with edge enhancement. Again, nothing it wrong with the encode, but it becomes enough to pull you out of the film.

Like Guardian, Legion is given a DTS-HD HR track, a lossy audio mix. Legion contains a number of explosions, some simply epic in their scale, and the subwoofer stays quiet. Sometimes it is funny how closely two films resemble each other when it comes to home video, sequel or not. Bass is even less prevalent in this effort, completely absent other than a small rumble when Gamera falls over or takes a step. It barely registers. The city of Sendai is literally wiped off the map by an explosion, and the sub might as well be turned off.

Thankfully, the Legion come and rescue the other elements, the swarms of the smaller creatures around 1:25:00 engaged purely in the rears as characters look on in awe. All of the channels are used for other purposes, include the creepy subway sequence where the critters run all around the train cars. They do the same inside a Pachinko parlor at 49:30 with the same effectiveness. City destruction usually features scattered debris passing through the soundfield if not aggressively.

Fidelity is adequate, certainly a bit dated, although the compression never seems too apparent. The volume has some balancing concerns, dialogue coming through lighter than the action. It is a minor difference, only noted by those sensitive to the issue.

There are no extras on the disc, unless you consider an English dub in stereo to be a bonus.