Back before the days of VHS and other home video formats, dreaming of watching endless monster movies was just that… a dream. For kids in the previous decades, it came down to the various monster magazines, promoting and talking about the films that were missed, were coming, and were just hitting theaters.

The Monster Squad is a perfectly realized screen interpretation of reading things like Famous Monsters of Filmland back then, from the giddy excitement the kids realize when they talk about these creations, to the weird fright yet joy of seeing these monsters. This is a movie that adores its source material, mostly the Universal gothic horror of the ’30s and ’40s, with a brief appearance by the Creature from the Black Lagoon, readily dropped as he always seems to be (he doesn’t even make the cover art).

The kids are the key, generally unknowns including Eugene (Brent Chalem) and Patrick (Robby Kiger). The film has no stars, no recognizable faces, but a stellar cast nonetheless. Duncan Regehr as Dracula carries a wonderful sense of evil and terror with him on the screen, going so far as to threaten a small girl. Tom Noonan’s take on the Frankenstein monster, complete with a nearly perfectly recreated approach to Phoebe (Ashley Bank) at riverside, is sentimental, sorrowful, and even emotional.

Stan Winston has a blast designing this make-up, crafting beautiful homages to the creatures he undoubtedly loved growing up. He makes his mark with a brilliant werewolf transformation scene inside a phone booth, where the camera briefly pans a human Carl Thibault, passes into the black, and then reveals the beginnings of the formation, briefly recalling the passing transformation in Werewolf of London (1935).

Everything about the film screams the ’80s, from the inevitable music montage sequence to the pleasing appearance of political incorrectness, down to the clothes. Fred Dekker only directed a few films including this one, his previous effort being the 1986 creature feature Night of the Creeps and he sadly followed Monster Squad with Robocop 3. It’s a shame too. While he doesn’t offer much in the way of fresh or unique direction, his affinity for these projects is evident, likely why he’s being sought for the upcoming remake.

One thing a remake can’t do is teach us anything. We know to stab vampires in the heart with a steak (even if they sparkle) and to shoot the wolfman with a silver bullet. A remake does not even need to confirm other wolfman information because yes, this 1987 minor nostalgic classic confirms that wolfman’s got nards. 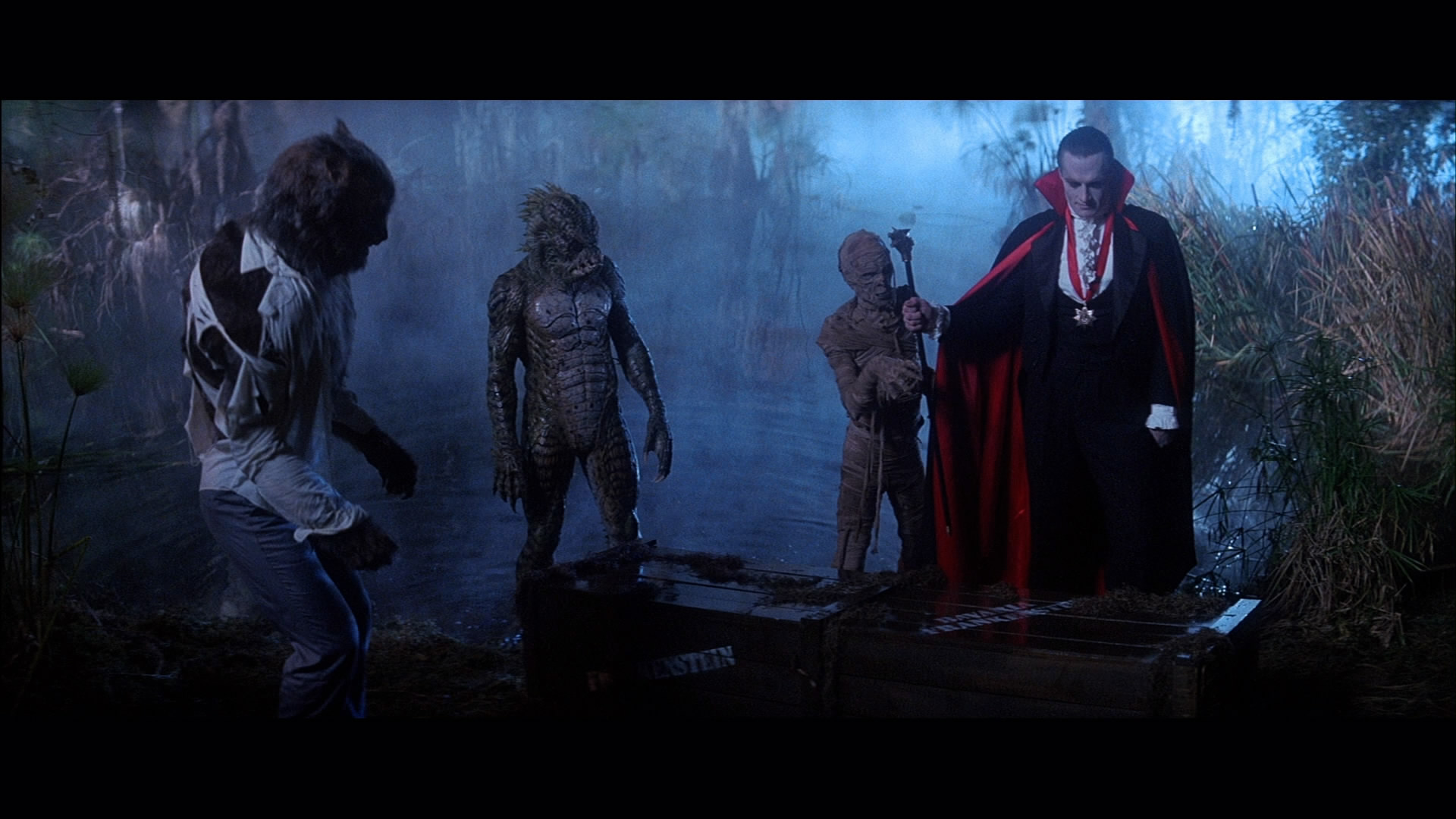 Lionsgate delivers an AVC encode for Monster Squad, the same source material used for the recent DVD release. It is fair, suffering from some sharpening that is evident throughout. Halos are not common, but still noted. The first appears over the kid’s heads inside the principals office at 7:54. Creepy German Guy’s house carries a notable line over it at 33:54, and a great shot of the kids walking into the sunset with Frankenstein is unfortunately plagued by edge enhancement at 43:04.

Even when end result of the sharpening is not evident, the film still looks a bit processed and unnatural. Shots involving trees and such lack a realistic crispness, such as 11:02. Grain is slightly heightened, appearing a bit noisy, although the encode handles it well. Some chroma noise on the fridge at 17:13 and some banding against the sky at 3:53 are the only breakdowns of note.

Colors are elevated, bringing forth some vibrant primaries, especially reds. The cape worn by Dracula darts off the screen, as do some of the shirts worn by the kids. Black levels generate some substantial depth, really great inside the plane’s cockpit 13-minutes into the film. There is no sense of murkiness or drab quality to the proceedings. It is also easy to pick up on the facial details here, one of the few times true high fidelity detail is resolved in this manner. The source is littered with specks and dirt, rarely bothersome but it’s still worth noting the source is not pristine by any stretch. Some blurring occurs near the top of the frame in a few scenes as well, possibly a result of the lenses utilized, forever affecting the source.

The opening credits deliver a loud, hefty theme created by Bruce Broughton, one unfortunately that struggles on the high end and comes through a bit distorted. It does bleed nicely into the surrounds with limited effect, about the only thing going on in the rears.

A Dolby 2.0 mix is also available, truer to the source material, and it remains evident in this DTS-HD effort as well. The stereos occasionally showcase a bit of a split, distinctly so, the best bit of directionality this source will offer. That is not much of a complaint as this effect remains without extensive tinkering.

Dialogue is noticeably hollow and canned, not to mention completely overwhelmed by the action. The sequence in which the mummy assaults the crew in the car is rough, the music completely taking over, washing out the various screams. While nothing of importance is being stated, it does eliminate some of the tension. Bass is nearly non-existent and forced, most apparent during the explosion of the tree house at 1:01:37. It is hardly natural and is obviously added to the mix via other means.

The extras here are total fan service, including two commentaries. Fred Dekker is featured on both, the first with Squad members Andre Gower, Ryan Lambert, and Ashley Bank. The second brings in the director of photography Bradford May.

Monster Squad Forever is a five-part retrospective, nearly as long as the movie itself in total, that reunites the cast for a varied selection of features. A vintage interview with Tom Noonan in character as Frankenstein is hilarious, followed by 14-minutes of deleted scenes. Note many of these were shown on TV to replace the inappropriate content. Storyboards, stills, and trailers are left.